Future in the sport of rodeo has become even more promising for one college cowboy.

Brunner, at six-foot-two, 225-pounds, is now ranked among the top steer wrestlers in both the National Intercollegiate Rodeo Association (NIRA) and the PRCA. 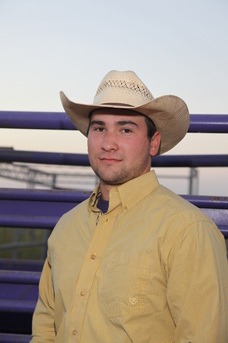 “This is my second year on the K-State team, and I’m a rookie, my first year in professional rodeo,” Brunner said the following morning after college classes.

“I’ve been practicing hard, and it’s paid off, but my education comes first,” the humble cowboy contended.

Doug Muller, K-State Rodeo Team coach, said there were 42 college cowboys from the NIRA Central Plains Region of Oklahoma and Kansas entered in steer wrestling at the K-State Rodeo.

Brunner threw his steer in 6.9 seconds in the long-go-round, then was first in the short-go-round finals with 5-seconds flat, to win the average in 11.9 seconds, for the $394 championship check, and 160 NIRA steer wrestling points.

“There were four Central Plains Region rodeos last fall, where Tanner won some points. The K-State rodeo was the first one this spring, and Tanner is leading the region in steer wrestling with 335 points,” Muller said

The top three cowboys in each event qualify to compete in the 2014 College National Finals Rodeo set June 12-15, in Casper, Wyoming. After the K-State competition, there were still six more NIRA rodeos in the region this spring.

During January, Brunner won the steer wrestling at a PRCA rodeo in Lincoln, Nebraska, dropping his bovine in 5.3 seconds, to collect $1,200 prize money, and rank him in the early year standings among the very best professional rodeo cowboys in the world.

In the PRCA steer wrestling at the Southwestern Livestock Exposition Rodeo in Fort Worth, Texas, during late January, Brunner was second in the second-go-round, flattening his steer in 3.8 seconds.

While Brunner wasn’t anxious to admit it, the $4,600 paycheck moved him into the top 20 PRCA steer wrestlers at that time. “It is the biggest win in my career to date, but the standings change about every day,” he conceded.

“Tanner is sure among the top professional rookie steer wrestlers this year,” Coach Muller credited.

To compete successfully in steer wrestling at these levels requires ability, practice and good horses. “I’ve worked with lots of cowboys in my career, and Tanner has the talent to be a champion wherever he competes,” Muller evaluated.

“I practice every day when the weather allows,” Brunner admitted.

“We’re fortunate that Dr. Ken Odde, head of animal science at K-State, lets us practice in Weber Arena, but that’s better for roping practice. The short run is hard on a bulldogging team, so we try to practice steer wrestling outside as much as possible,” explained Brunner, who also competes in calf roping and team roping.

Starting out in junior rodeos, Brunner credited: “My parents helped me as much as they could. My dad rode bulls and broncs and steer wrestled, and was a lot of help in those events, but limited in roping. My parents sent me to calf roping and team roping schools as well as two of Chancy Larson’s bulldogging schools,” Brunner commented.

At the K-State competition, Brunner rode his own horse called Starburst that he’s ridden since collecting high school rodeo championships. “Starburst works well for college rodeos, and Caleb Bullock from Panhandle State hazed for me. Caleb hazes (keeps steers running straight for bulldoggers) for many of the steer wrestlers in the region,” Brunner said.

A different horse called Bert is used by Brunner in the roping events. “I finished and seasoned Bert in calf roping after we got him back from a trainer, and I trained him as a heel horse for team roping. I also used Bert to haze on steer wrestling for a while,” Brunner related.

Frequently when competing at PRCA rodeos, Brunner will use a bulldogging team being hauled by another cowboy. “I often do travel to rodeos with Chancy. He’s a good hand, one of the top steer wrestlers in the PRCA Prairie Circuit every year,” Brunner said.

“I started coming to Chancy Larson’s to practice at the end of my sophomore year of high school and have learned all of the little things that make a good bulldogging run from him and a few other guys who have helped me,” Brunner appreciated.

While his steer wrestling record is most impressive, a cowboy can’t win at every rodeo. “I haven’t traveled too far from home really, but there have been a couple of rodeos where I didn’t get in the money this winter,” Brunner calculated.tanner brunner (2)

Rodeo runs in Brunner’s veins as his parents had successful rodeo careers. His dad Tracy, mom Yvonne and sister Cat all competed on the K-State Rodeo Team, as did an aunt and an uncle. 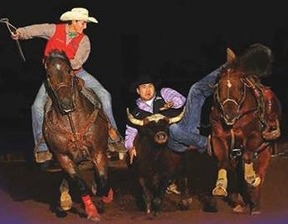 Looking to eventually being involved in extensive Brunner family ranching operations in Marion County, that may be decades away. “My first goal is to win the steer wrestling in the Central Plains Region, go to the National Finals College Rodeo, and do well there,” Brunner said.

Next in line for the cowboy’s plans: “I will go to PRCA rodeos here in the Midwest until school’s out in the spring, and see how I’m doing. I’d like to hit the pro rodeo circuit hard this summer, see how I’m ranking in the rookie steer wrestling standings, and go from there.

“My intentions now are to rodeo professionally fulltime after I graduate, and of course compete at the National Finals Rodeo in Las Vegas, and become a world champion,” the present day champion college steer wrestler summarized.

Shelby Leonhard, K-State agriculture economics student from Oskaloosa, won first place in goat tying en route to being crowned the all-around cowgirl at the K-State Rodeo. She was 6.2 seconds in the long-go-round, and had a 6.4 seconds run in the short-go-round finals, to win the goat tying average in 12.6 seconds, worth $382.20, and 145 NIRA points.

Coach Muller recognized, “Shelby is sixth in the region in goat tying at the present time. We’re extremely proud of her.”

At the conclusion of this year’s K-State Rodeo, the K-State Men’s Rodeo Team was 11th out of 16 in the region, and the Girl’s Team ranked ninth out of 12.