“If we’ve done our job right ahead of time, there generally aren’t too many problems with cattle after they’re turned out.”

Going to grass is an always an exciting time, but getting ready is lots of hard work and involves much more than one would initially think.

“We’d wanted to burn today, but it doesn’t look like we’re going to. Things could change,” Mike Collinge said about 2 o’clock Thursday afternoon.

But, conditions were not enhancive later in the day, so by a couple hours after suppertime, the Hamilton rancher evaluated, “We only have 100 acres burned. That’s not much compared to what we need to get done.”

However, he quickly added, “We got an inch of rain last night, and we really appreciated that. It’ll get this native grass growing.”

The dedicated Greenwood County cattleman is always busy, but the month of April and especially the first two weeks have to be the most hectic of all.

“Two years ago, the spring was way early, and we had some cattle already turned out by now. But, this year is a couple weeks later. We sure hope to get turning cattle out by the 15th and have most everything on pasture the 25th,” Collinge calculated.

That’s not far off, certainly, considering all of the work ideally yet to be accomplished. “We want to burn most of our native Flint Hills pastures. It’s not too late, but there’s just not going to be enough days left,” figured Collinge, who has his own grassland and cattle.

But, that’s just a small part of what he does. “We have mostly leased pastures with absentee owners, and take in cattle for summer grazing. It’s all in Greenwood County, but there’s plenty of work to keep me, my son Glen and several fulltime employees busy,” he said. “We take in a few cow-calf pairs, but mainly yearlings, because they so out-compete cows.”

Realizing the importance of burning native Flint Hills pastures to control intruders and improve grass quality for higher cattle gains, Collinge pointed out, “Of course, we have to check all of the fences, but the main thing right now is making sure we have the cattle in the right condition, so they’ll go right to gaining when the native Bluestem is at its peak quality.”

Although pond water has been an issue in recent years, and is still a concern in certain locale, Collinge said, “We’re in good shape water wise from the rains we got last summer and early fall. We feel good about that, too.”

“We want to have the yearlings gaining some weight, healthy and going good. We’d like to have them putting on about a pound a day, not too fleshy, but not skinny either, or it takes the cattle too long to start utilizing the lush grass efficiently,” Collinge said.

“These cattle have two rounds of vaccinations in a 30-day period and a complete parasite control program as part of our preconditioning program,” he explained.

Given By Collinge During March

“We like to move them (400-500 pound cattle) through the system as often as possible,” Collinge said.

“I really believe that how we handle them here will affect how they perform after we gather them off grass. Feedback from the feed yards say this system pays off big time for them,” according to Collinge, who contended that the simple but effective essential tool for health management in stocker cattle is a thermometer.

Day one: Within 24 hours of arrival, calves are put through the processing facilities, the first round of vaccines administered, and temperature readings recorded. “I’ve yet to find anything as effective as temperature to really measure a calf’s health,” Collinge said.

Day 5-7: Calves are run through the processing facilities again, temperatures again recorded, and antibiotics administered if deemed needed.  “We like to play offense, not defense on animal health. You can never catch up if you’re playing defense,” Collinge explained. “Monitoring and recording temperatures indicate health issues long before they start showing physical signs.” 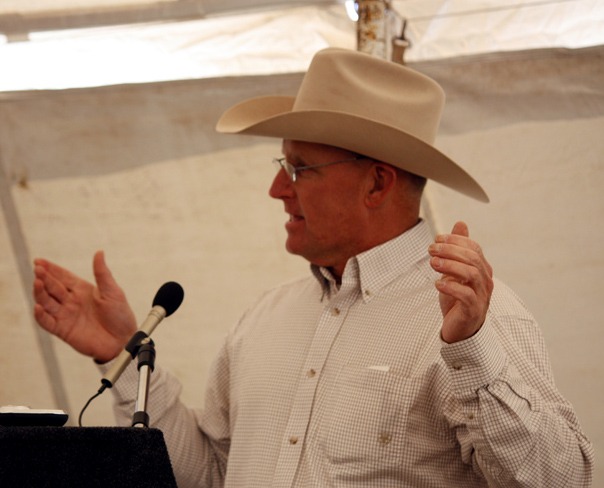 Lot loads are kept in separate grass traps and brought in one at a time once a day. The first three weeks are a critical time to get the calves on proper nutrition so they’re ready to be on their own grazing.

“Copper, zinc and selenium are incredibly important parts of a starter ration when it comes to the health of these calves,” Collinge said.

After feeding, the group is kicked back out to pasture, and the next group is brought in and monitored by the ranch crew. Calves that appear sick have their temperatures checked and monitored.

Calves that are slow to the feedbunk and are hanging around others already showing physical signs of illness are the most likely candidates for sickness. “You might find one or two in that group that are running a temperature, besides the ones that looked sick,” Collinge said. “You can get ahead of sickness and treat those cattle before it becomes a problem.”

“We get a lot more performance out of those calves, because health issues are addressed sooner. There is no time difference between running a whole set of calves through the chute compared to pulling five to 10 calves all the time,” Collinge insisted.

Before implementing this handling system, Collinge said it was common to treat up to 60 percent of any given group.

“Now, we pull less than 10 percent for health treatment.  This reduces our time and cost considerably, but we hope that these things are also having an impact on carcass quality and performance. The goal is to create cattle that will do better down the line,” Collinge verified.

“There are occasions when health issues become quite serious, and Dr. Duane Droge, the veterinarian at Eureka, is real good about helping us get those cattle healthy again,” Collinge credited.

However, most of the cattle to be turned out in the next several days on native Flint Hills under Collinge’s watchful eye will be shipped in from distant locales.

“Many of these yearlings are coming from repeat customers, and most of them will have been preconditioned similar to what we do. Yet, every situation is different, and after they’ve been on the trucks for several hours that can take its toll sometimes, too,” Collinge admitted.

“Most of these cattle are for short season grazing, with increased stocking rates. We intend to take most of the cattle off pasture about July 15, but of course with so many cattle in so many pastures that time spreads out,” he recognized.

Cattle weighing in the 575-pound range typically are allowed about two acres of native Flint Hills pasture, while those heavier yearlings are given 2.2 to 2.3 acres per head.

In the past, it’s not been that uncommon for certain pasture managers sometimes to find their work really begins after the cattle are turned out. “That’s not the case for us. It’s truly the best time of the year,” Collinge insisted.

“We are on horseback everyday checking the cattle in our pastures, but we don’t spend all of our time roping and doctoring. We don’t have many problems, when we’ve done our work ahead of time, and we do,” Collinge contended.

“It’s a really enjoyable time for us as the green grass grows, and the cattle put on the pounds. We can almost see them both grow,” he continued.

Gains vary according to the year, and the cattle, and even the pastures. “We shoot for three pounds a day, and it can happen, but  realistically our gains are usually close to two pounds a day on the average,” Collinge rationalized.

Although pastures are different, Collinge reconciled, “Even in pastures that have ‘go-back’ to native grass, those that have been overgrazed, and others with more brush and timber, our gains can be quite similar, when we stock them accordingly.”

Origination and type of cattle has some bearing on gains, but Collinge reiterated: “Still the preconditioned cattle will perform quite well.”

Although four-wheelers come in handy sometimes for fixing flood gaps or going distance to locate a bewildered stray, Collinge said, “We do all of our cattle work on horseback, so when it comes time to gather in July, the cattle are used to us. We don’t want to have any wrecks during the summer roundups. That defeats our whole objective.”

Raised in the western edge of Emporia, Collinge settled in Greenwood County after graduating from Kansas State University in 1977. “I’ve always been interested in cattle, and the grassland, the relationships of all parts of both. What we have now developed very, very slowly,” he verified.

Evaluating record high present cattle prices, Collinge said, “They sure are offering some opportunities, if we can be quick enough to figure them out. They’re unprecedented, but sure welcome.”

Likewise, Flint Hills values, Collinge critiqued, “It’s volatile, and there’s probably been more native pastures traded at these levels than ever before, maybe. I don’t know if it can continue.”

Considering himself “fortunate” to have acquired some of his base ranchland more than three decades ago at considerably lower prices than that valued today, Collinge said, “Then, I’ve bought some, too, for what I think was very expensive. But, it’s situated next to what we already had. That makes it more valuable to us, anyway.”

A leader in the Kansas Livestock Association, Ranchland Trust of Kansas and the Tallgrass Legacy Alliance with heartfelt desire to work for betterment of the cattle industry and preserving native Flint Hills grasslands, Collinge looks to continue improving and expanding Collinge Ranch operations.

“The business is good, some of the best we have seen. I hope it will continue. We’ve been fortunate to continue to grow, and we are always looking to expand. We really never know when an opportunity will arise, so we need to ready to take advantage of one when it does,” Collinge concluded.