“Everywhere he went; there was a rope in his hand.”

Nobody will question the comment, as those who can reflect more than three decades ago, first think of a little boy with lariat in hand often throwing it at whatever might be in sight.

“My first rodeo was actually in the junior steer riding at the Longford Rodeo, and I fell off. However, I guess that was a good thing, because I knew then I was going to be a roper. That’s what I am and always will be,” the Liberty, Missouri, cowboy insisted.

Not only a roper, but truly one of the very best in the country. Most recent verification came when Kitchener, who grew up in the Manhattan-Wamego area, was again crowned as all-around cowboy for the year in the United Rodeo Association (URA).

Those accolades recognized at conclusion the recent annual URA Finals Rodeo in Topeka are for collecting the most money for the year in multiple rodeo events. Of course, roping: team roping with J.D. Holland of Bucyrus as his partner, and in calf roping.

“I’ve had another good year, but there are ups and downs in this sport, that’s for sure,” Kitchener admitted.

Riding before he could walk, Kitchener has always been horseback whenever possible, trailing his dad Bob Kitchener of Manhattan helping gather and look after cattle in a wide part of the Flint Hills.

“Dad has always been a cowboy, anything to do with horses, sales, rodeos, you name it. So, I guess you’d say it is in my blood,” Kitchener said.

Riding his first most memorable horse, a big sorrel gelding called Charlie Boy, today’s champion always tagged along. “Dad worked for the Sun Rock Ranch at Junction City, which had a horse and cattle operation, so that was just perfect for me.

“We got to help Dusty Anderson of Skiddy look after cattle, too. I have to admit that Dusty was my first cowboy hero. You know Dusty; he was lots of little kids’ idol, wasn’t he?” Kitchener said.

Preferring to be horseback with rope in hand, Kitchener had to leave his lariat in the truck seat when he went to school. “My teachers frowned when I tried to practice roping during recess, instead of playing dodge ball with the girls,” he grinned.

However, as soon as the dismissal bell rang, Kitchener had lariat in hand. “I practiced all of the time, ever since I can remember actually. I must have roped the dummy a jillion times a day,” Kitchener claimed.

His first prize came in the calf scramble. “Of course, I always had my rope wherever we went, and I always entered the calf scramble at rodeos, that was as close to the calf roping event as I could get for a while,” he said.

Big payoff came when the then little cowboy was eight years old. “I won the junior all-around title in the Morris County Youth Rodeo at Council Grove. I didn’t expect it. I hadn’t won any events, but had placed in them. So, that was a big deal for me. It really got me rolling,” Kitchener confessed.

In those days, all-around cowboy was certainly a misnomer for Kitchener. “I competed in every event that I could. Of course, roping, but barrel racing, pole bending, everything. Well, I wasn’t in calf riding and rough stock, I got my fill of it early on,” he pointed out.

That was just the beginning. “We had practice cattle at home and roped just about every day, went to a lot of jackpots, and I’d enter a junior rodeo if there was one anywhere around,” Kitchener continued.

“That first junior all-around rodeo championship was a big deal, but I really can’t remember all of the other ones as I was growing up. There were a bunch of them for sure,” he said.

By the time he enrolled in high school, Kitchener’s life on horseback with a lariat in hand made him one of the very best in Kansas and across the nation.

“I didn’t miss a high school rodeo in the state four years, won the team roping two years and the all-around when I was a senior, placed second in calf roping and steer wrestling two years,” Kitchener said.

Of course, those high yearend standings qualified the then-Manhattan cowboy to enter the National High School Finals every year. “We won a go round and placed in the team roping at the finals one year,” Kitchener tabulated.

Horses are always the key to cowboy success, and this champion has ridden lots of them. “There are plenty of horses, but finding good ones that fit to win aren’t that easy to come by. I’m fortunate to have had several top mounts through the years,” Kitchener conceded.

“There have been better horses for sure, but one of my favorites, probably because I was just getting started and could do everything on him, was a gray gelding I got from Charlie Koenig of Alma, who’s always been a good friend of mine and my dad. That helped make Gray more special too, I guess.

“Of course, the horse’s name was Gray. There have been lots of ‘Grays’ through the years, but he was still the ‘best,’” Kitchener verified.

Obviously, the high school champion was solicited to be on college rodeo teams throughout the Midwest, and Kitchener accepted a scholarship to attend Fort Scott Community College, then one of the top National Intercollegiate Rodeo Association schools in the country.

After graduation, Kitchener continued full steam forward becoming a professional in the only life he’s ever really known: cowboy.

“I’d been riding colts since grade school, expanded that some, worked on finishing calf and team roping horses, traded and sold some horses, and went to every jackpot roping and rodeo around,” Kitchener  calculated.

There were several amateur associations, including the URA, nearly always a filled calendar of competitions, but Kitchener went the biggest step qualifying to enter rodeos sanctioned by the Professional Rodeo Cowboys Association (PRCA).

“I filled my permit in calf roping and got my PRCA card at the Flint Hills Rodeo in Strong City in 1994,” Kitchener said.

So, if there is a roping anywhere, Kitchener is there, despite the grunts of his competition whenever they see his rig pull into the grounds.

“I’ve been to the Dodge Circuit (PRCA) Finals the past couple of years in Louisville, and placed second at the USTRC (United State Team Roping Circuit) Finals in Oklahoma City one year,” Kitchener tallied.

Really, it’s impossible for the cowboy to tabulate all of the awards he’s collected. “I don’t keep track. I must have won 30 saddles, sold a lot of them to pay entry fees at the next roping, and there’s a 100 or more buckles. I just don’t know,” Kitchener conceded.

Team roping is his main event. “I haven’t done any bulldogging to speak of since college. I do calf rope when there are good cattle, good ground conditions and I can use somebody’s good calf horse. But, you can tell, I’m pretty particular. I’m always in the team roping.

“I stick to the heading anymore. I was mostly a heeler in high school and college. But, I can rope either end, if somebody needs a partner,” Kitchener said.

Enroute to his URA all-around cowboy title, Kitchener collected $11,189.81 in team roping to also be the yearend URA team roping champion, with his additional money won in calf roping throughout the year.

As there have been thousands of roping competitions, there have been lots of partners for Kitchener through the years, and even several in just a week of entering events.

“I’ve been roping with J.D. Holland of Bucyrus. He’s an outstanding heeler, and we seem to make a good team,” Kitchener credited.

Collecting URA titles isn’t new for the cowboy either. Kitchener won the calf roping in 1998, and was champion in team roping in both 2008 and 2009, and also the all-around champion.

“I try to get to every URA rodeo that I can, but it gets hectic sometimes knowing which competition to enter. I try to figure out the economics and go to the ones with the best chances of making the most money,” Kitchener commented.

Again, none of this is possible without a horse. “I’ve been roping on a 13-year-old dun gelding called Tyrone Gold for about three years. He takes care of business for me. We get along very well,” Kitchener said.

Now 41, Kitchener and his wife Carilee have the next generation cowboy: their seven-year-old son Tradyn. 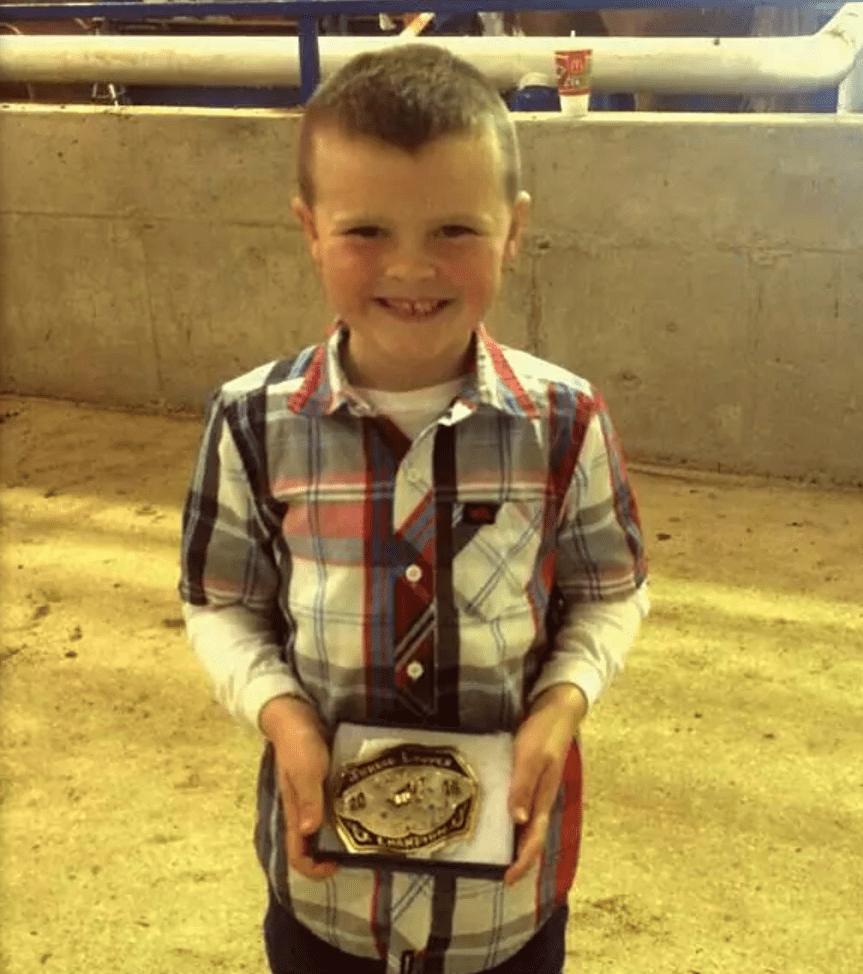 “He’s a cowboy, too, that’s for sure. His horse is called Chocolate Chip, and Tradyn ropes just like I did when I was his age. He won his first dummy roping the other day. That was a really big deal for him, maybe even a bigger deal for me, his mom and his grandpa,” Kitchener declared. 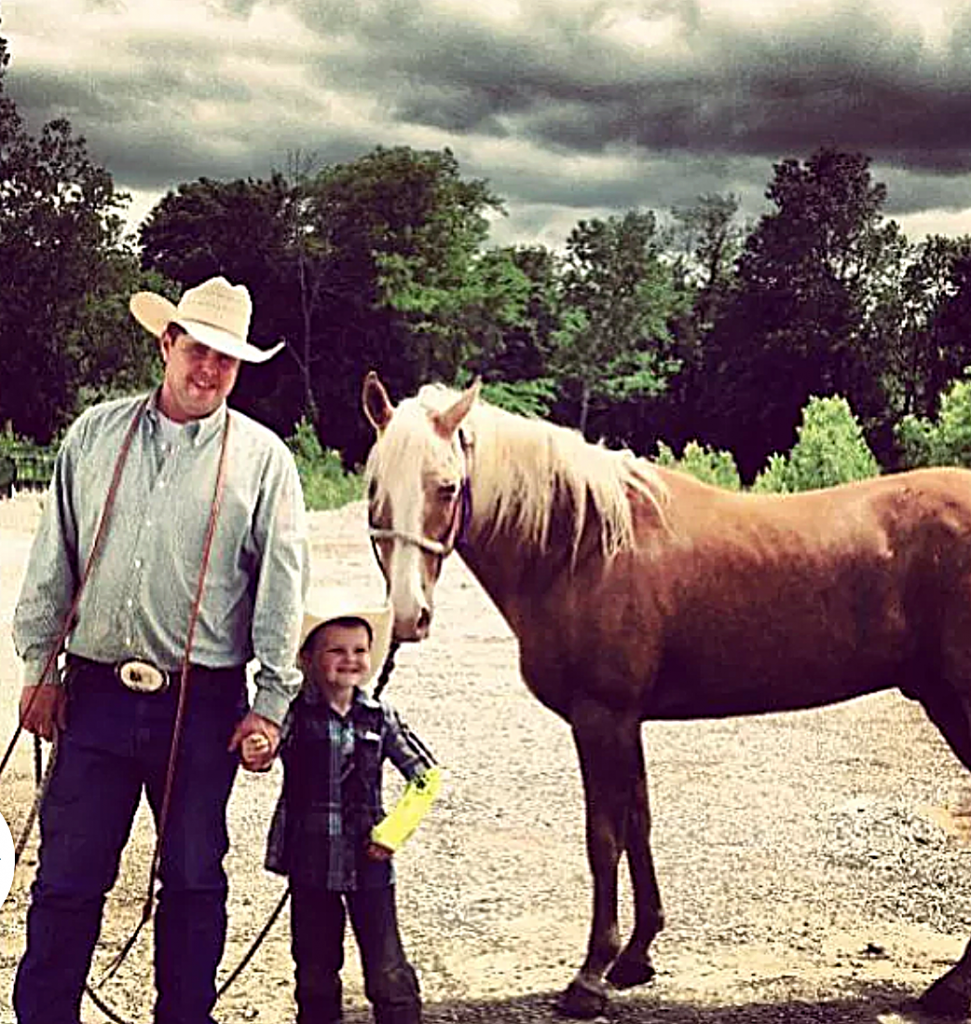 Personal practice isn’t as important to the champion these days, but rather coaching others in the sport closest to his heart. “I help Tradyn every bit I can and anybody who needs assistance I’m willing to help,” Kitchener said.

Finishing rope horses is his off-road profession. “It all depends on the horse, but one that is broke, has athletic ability and wants to learn, I can make a good head or heel horse in four or five months. I have two customer horses I’m training now. I’ve had more sometimes, but it’s better not to have too many, especially in the summer when there’s a rodeo every day,” said Kitchener, who keeps a few practice cattle and is saving Corriente-Longhorn heifers to raise roping stock of his own.

Again, exact number of ropings the champion enters annually seems impossible to count. “I probably average three or more a week, but sometimes there’s one every day. This is my down time right now. I haven’t been to one since the URA Finals,” he said.

That’s another misnomer, because even though he hasn’t been to a rodeo, Kitchener has competed in a number of jackpot team ropings, and has several on his agenda in days ahead. “I try to go to all of those around close, and then enter up as often as I can to try to win some,” he continued.

But, in clarification, the rodeo competition for the next season kicks off with the New Year’s Rodeo in Kansas City. “That’s my next rodeo, and it’s always a big deal to get started winning for the season,” Kitchener said.

“I’ve always been a cowboy. I’ll always be a cowboy. That’s for sure,” the champion all-around cowboy concluded.