This Hippie is a real clown.

While that might sound like a pun, there’s truth to it, even though these days Wesley Engelkes often looks more like a clown than he does a hippie. 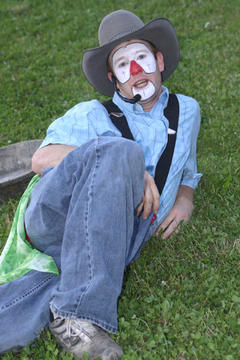 While today’s generation might not even know what a “hippie” is, that’s the nickname given Engelkes back when he had long hair and unconventional cowboy attire, even sometimes wearing “Grateful Dead” necklaces and sandals.

“I was in the chute getting down on a bull when one of my buddies hollered at me: “Hurry up you hippie,” and the name’s just stuck,” Hippie Engelkes admitted.

“Actually, it was an inherited trait; my dad was a cowboy hippie from back in the’60s-’70s generation when some of the young people dressed unconventionally, rejected social and political values, while proclaiming belief in universal peace and love,” Engelkes clarified.

“Now, I have short hair, and I’m a clean cut cowboy-clown-rodeo-entertainer and family man. But, Dad still lets his hair grow long sometimes, and then gets it cut short, too,” Hippie related.

“Appearance means a lot to some people. I’ve come to learn that,” contended Engelkes, who may not give that initial impression to some when he struts out in his clown makeup and attire.

Engelkes grew up in a farming community near his present home at Steamboat Rock, Iowa. His family had horses and his cousins competed in rodeos, but Hippie wasn’t really involved in the sport until 1997, when he graduated from high school.

“I didn’t go to any rodeo schools or anything. I had some friends who were riding bulls, and I just got on, was bucked off and stepped on, but kept on going. I’ve always had a lot of adrenalin and still do,” Engelkes claimed.

“I started out riding bulls and then kept riding bulls, but also started clowning and fighting bulls at the same rodeos in about 2002. I have pictures of myself on bulls in clown makeup,” Hippie said.

“I’m living my dream. I always wanted to ride bulls and fight bulls. It’s a cool deal. Not many people can live out their childhood fantasy, and that’s what I’m doing. It’s a great life,” Engelkes claimed.

“I started out at amateur rodeos, and I’ve had my PRCA card since 2009. I’m privileged for the opportunity to work rodeos and bull ridings throughout the country,” Engelkes noted.

Obviously, Hippie isn’t too scared of his profession, but what makes him stand out from other rodeo clowns is his impromptu interaction with spectators.

“I’m high strung, full of energy, very hyper, and have been all of my life, for 34 years. I don’t tell jokes as much as most clowns, or have any routines, so everything is fresh entertainment, interacting with the crowd,” described Engelkes.

Clowning allows him to use his special sense of fun and high energy, to work his magic that brings big smiles and merry laughter to the spectators.

Clowning is the fun-and-games part of his act. Bullfighting is the damage-defying part. “He’s pretty safe in the barrel,” his wife, Rebekah, said.

“It is a little nerve-racking when the bull repeatedly smashes into the barrel,” she noted, “but you get used to it after a while.”

However, his favorite thing to do is to spend time with his wife and their six-year-old daughter, Emma, and four-year-old son, Wyatt.

No slowdown is in sight for Engelkes, who is confident: “I’ll be clowning at the National Finals Rodeo in Las Vegas one of these years. It’s a cowboy’s dream to make the big time, and I don’t have any doubt I’ll be there.”

However, he is a bit concerned about the low number of bull riding contestants at the present. “We need another movie about bull riding to get more cowboys interested in the sport again,” Hippie contended.

“Today’s generation has too much technology. All they want to do is grab a phone or play on a computer instead of getting out and enjoying life,” Engelkes said.

An opportunity for first-hand-appreciation of Hippie Engelkes’ entertainment will be Saturday, Sept. 14, during the fourth annual Flint Hills Bull Blowout at the Flint Hills Rodeo Arena in Strong City, beginning at 6:30 p.m.

“I’ll be there to see you,” Hippie welcomed.