“As far back as I can remember, rodeo bulls have been a part of my life.”

The Ulysses cowboy is a rodeo bullfighter, times again proven the best there is, and demanded at the biggest rodeos and bull riding competitions in the country. 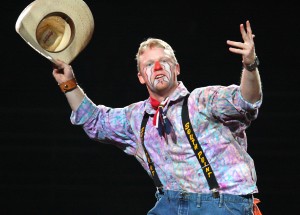 “My grandpa Doug Munsell Sr. was a bullfighter, my dad Doug Jr. followed in his steps and now it’s me. My uncle Danny Munsell worked with my dad, and now Danny and I sometime work bull ridings and rodeos together,” related Munsell, who’d just arrived at Fort Hays State College to fight bulls during the National Intercollegiate Rodeo Association event.

“I’ll never forget the first time I was part of my dad’s clown act at a rodeo in White Deer, Texas. I was just three-years-old, and now I’m doing what he did then.

“(Uncle) Danny will be with me at Manhattan when we fight bulls for the Brett Cushenbery Memorial Bull riding,” Munsell said.

“We’re really happy to have Wacey Munsell back for our Cushenbery Bull Riding Saturday evening, April 27, at CiCo Park in Manhattan. Wacey is the best there is. I’ve known him all of my life. His dad was my high school vo-ag teacher,” said A.J. Griffin, who’s organizing the tenth annual memorial event.

“I’ve always wanted to be a bullfighter,” reflected Munsell, noting childhood ventures fantasizing his future profession. Munsell used practically anything he could find as an imaginary bull.

This included “family dogs, swing sets, a billy goat that butted my miniature clown barrel around, a ram that local show sheep breeders thought was too  mean to handle and sometimes nothing at all,” the bullfighter reflected.

“Of course, my dad, my grandpa and my uncle were my heroes and mentors, but I’ve always tried to mimic the moves of legendary bullfighters like Rex Dunn and Rob Smets. I was fortunate to know both of them personally and learn their fine points of bullfighting,” Munsell declared.

“We had a cowherd to raise and train bucking bulls. I started riding calves and stuff, when I was seven-years-old, and graduated up to big bulls,” explained Munsell, who was successful in the Kansas High School Rodeo Association.

“I did fairly well, actually, but I was always kind of small. I soon found out fighting bulls paid better than trying to ride them,” Munsell continued.

Not only did Munsell join the tours, he was the 2004 world champion freestyle bullfighter, just eight days after his 18th birthday, and then struck again two years later claiming his second world championship buckle.

As a senior, Munsell was approved for his Professional Rodeo Cowboys Association (PRCA) bullfighter’s card and competed in the Benny Bunion Bucking Stock Sale bullfighting competition in Las Vegas, emerging again as champion.

Additional major rodeo bullfighting titles have been added to his impressive resume.

However, financially more importantly is the demand for Munsell to save cowboys from bucking bulls at major rodeos across the country.

“I just fell into some of these good jobs after other bullfighters retired,” Munsell claimed.

Attending Dodge City Community College on a “bull fighting scholarship,” Munsell graduated there and headed to a couple of other colleges.

“The instructors couldn’t seem to understand that I was a rodeo bullfighter, and I had to miss class sometimes to be at a rodeo. So, I never have completed my senior college work,” said Munsell.

. “I’m on the road constantly working rodeos for nine months. It slows down in the fall, so I only have a couple events a month. I work about 40 rodeos or bull ridings a year, but some of the winter rodeos are two week runs,” ciphered Munsell.

Often rodeo bull riding is promoted as “the most dangerous sport participated in by man,” but in reality rodeo bullfighting would have to be even more hazardous.

“It’s part of the business for sure, and I have had some injuries, but fortunately nothing too serious,” Munsell contended.

Without personal prejudice, 26-year-old, 5-foot-six, 170-pound Munsell evaluated his personal abilities: “I’d say its good fundamentals and being fortunate to be around and work with the very best bullfighters there’ve ever been.”

Realizing he can’t continue fighting rodeo bucking bulls forever, Munsell said, “I want to continue as long as I can do the job right protecting cowboys. But, when I am not physically capable of that, I may work the barrel, be a clown and funnyman. I think I can handle that, too.”

While Munsell and his dad have dispersed their cowherd, they still own a few bucking bulls used by rodeo contractors and at jackpots the partners produce. “I would like to be a stock contractor possibly when I retire, if my bank account allows me,” Munsell concluded.