Six eyes gleaning at one in the moonlight about midnight, after two newborn baby calves have just dropped from their first calf mommas onto the snow covered ground, makes a chill run down anyone’s spine.

Coyotes have little bashfulness anymore as they cover a nightly route supper searching for their yelping pups what sounds just a few feet away. 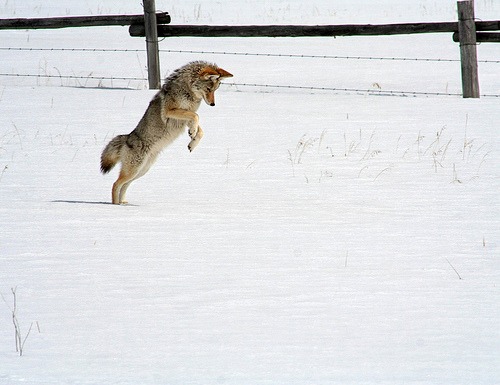 Such has been common in the dimly lit calving lot when coyotes come within feet of human surveillance to grab fresh warm afterbirth.

The shrewd doglike creatures of the wild would without reserve consume a lifeless newborn, or even perhaps a helpless crippled or weakling, if there were not protective mothers nearby.

Blood-gurgling howls by what sounds like a thousand coyotes every dusk makes one think the population is on the rise despite reports of hunters and trappers doing their part to keep numbers in line.

It’s true that coyotes cause financial burden by destroying calves, lambs, and farm pets. If a rancher loses one calf, sometimes the damage gets reported out of proportion.

Yet, seeing cunning coyotes with a cowherd in the middle of the day could certainly make one embellish happening, and increase imagination of what might occur.

Despite their traditionally negative reputation, cunning coyotes deserve our acknowledgement for their legendary adaptability, perseverance and survival in modern times.

While they readily scavenger livestock remains, coyotes help keep small rodent and rabbit populations controlled, actually depending on plants for bulk of their diet.

Drought has had its impact as ingenious coyotes go further to find water. They are commonly even wandering into major cities for ample drink and people’s wasted food.

A fond childhood memory is hunting coyotes with Uncle Don, who had a wide reputation for his Jeep filled with hounds. However, our son and grandson have trapped dozens of coyotes and also shot a sizeable number in recent years. We’ve shot at a few coyotes, but all we did was frighten them.

Despite mechanized hunting, highway kills and other control attempts, crafty coyotes with litters of sometimes a dozen pups coupled with their remarkable resilience are another inspiration of nature.

Reminds us of Isaiah 13:22:  “The howling of coyotes will give you the shivers.” Most importantly, Genesis 1:25: “There were wild animals of every kind, and God saw that it was good.”