Accepting the check for more than $2,000 and accompanying awards for winning the Championship Bull Riding at Manhattan, Dillon Tyner of Hoyt, Colorado, exclaimed his feelings briefly.

And two weeks later, the adrenaline was still following: “That was just the third and fourth bull I’d been on since being out for six months from major hip surgery, so the win was even all that much better.” 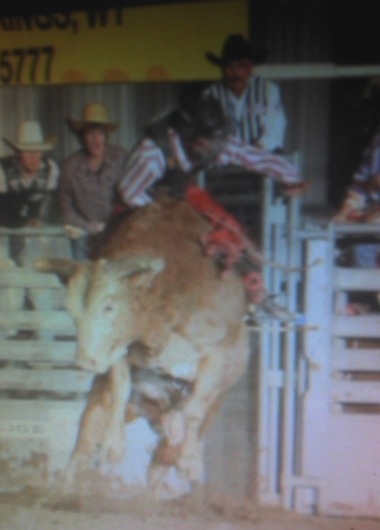 The second annual CBR event hosted as a major rodeo scholarship benefit for the K-State Rodeo Club had Weber Arena nearly packed full with spectators from throughout the Midwest.

Most were decked out in purple, making an even brighter hew with the purple bucking chutes.

“We were elated at the attendance, and the quality of the performance,” evaluated Beth McQuade, rodeo club sponsor.

“The bull riding is one of the only chances for many students to become familiar with the Western tradition,” McQuade added.

“Quality of bulls was exceptional, and we had several outstanding bull riders,” noted Doug Muller, coach of the K-State Rodeo Team. “Only three bull riders qualified on two bulls, and there were only nine qualified rides in the entire bull riding, which speaks highly of Vogele Bulls.”

“Overall, the bull riding netted about $5,000 for the rodeo scholarship fund,” McQuade tabulated.

There were 33 bull riders entered in the long go-round won by Dan Candiotto with 85.5 points on Magnum of the Smith & Cervi string

Jarrod Long and Kyle Sherwood, split second and third in the long-go with 85 points each. Mark Johnson marked 84 points, and Tyner had 82 points on Vogele’s Bet On Black to make it into the short go-round.

Remainder of the ten riders in the short go-round was drawn from those who were bucked off in the long-go.

There were only four qualified rides in the short-go. Highest marked ride was made by Tyner who scored 88 points on Vogele’s Unfinished Business.

“It was the first time I’d been on that bull, but everything came together. I’d sure like to draw him again,” contended Tyner, whose 170 points on two bulls handily collected the top award.

Johnson’s total on two bulls was 167.5 points for second in the average, and Long’s 166.5 points on two head rated third.

Alexander Cordoza didn’t make it to the whistle on his long-go bull, but had the second highest ride of 87.5 points in the short-go to also end fourth in the average, ahead of Candiotti’s 85.5 points from the long-go, and Sherwood was sixth in the average with his 85 in the long-go.

“I started riding sheep when I was four-years-old, graduated up to steers, then bulls and broncs. It’s all I’ve ever wanted to do,” said Tyner, as he was en route to San Angelo, Texas, for a Professional Rodeo Cowboys Association (PRCA) rodeo bull riding.

“I’ve been getting on more than 100 bulls a year in CBR, PRCA and Professional Bull Riding competitions,” Tyner calculated.

Qualifying for the National High School Rodeo Finals as a junior in saddle bronc riding, Tyner was second in the Colorado High School Rodeo Association in bull riding as a senior and competed at the national finals in that event.

“I rode broncs as a senior in high school, but since then I’ve strictly stuck to bulls,” Tyner commented.

Health issues are common for rough stock rodeo competitors, and Tyner has had his share. “I broke my leg in high school, and it didn’t heal right, so I had to have additional surgery, with plates and pins,” he described. “Then, when they got that right, I started having hip problems, which required additional surgery, and again put me back out of commission.

“Now I’m going strong,” contended Tyner, whose record indicates he qualifies on 40 percent of the bulls he mounts.

After Manhattan, Tyner competed the next week at a PRCA rodeo in Jackson, Mississippi. “That bull got me bucked off, but that happens. We’re human cowboys, not robots,” Tyner reviewed positively.

A diligent exercise program for both body and mind are essential to succeed in the sport, according to Tyner, who stressed the importance of “staying focused all of the time.” When he’s home during the week, Tyner works on an oilfield crew, and has daily physical fitness training, including considerable running.

A bucking bull breeding program is owned by Tyner in partnership with his uncle and his dad, Lonnie, a successful bull rider in the Mountain States Circuit Finals.

“I made the Mountain States Circuit finals in 2011 and had the high marked ride of 88 points on the National Finals Rodeo bull, Kid Twist, from Burns Rodeo Company,” Tyner pointed out.

With obvious optimism, Tyner said, “This year is starting off right. My goal is to make it to the finals in the PRCA, PBR and CBR, and I’m confident I can.”