“The ‘bleeding hearts’ got reprieve again.”

It sounds terribly rude, and crude, but that’s exactly the way one lifelong horse breeder, champion-horse exhibitor, internationally-recognized horse merchandizer, and true horse lover evaluated announcement that a horse slaughter facility to be open in Missouri at this time is not operating due to intrusion from politically-instigated opposition. 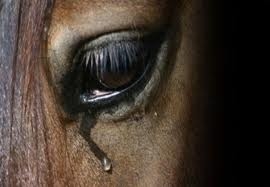 The plant at Rockville, Mo., population 166, was set to be in business by summer’s end, employing four dozen people.

Residents there had embraced turning a defunct beef processing plant into the nation’s first horse slaughtering facility since 2006.

“The whole town is for it,” proclaimed Mayor David Moore in June.

Now it looks like horse meat won’t be the town’s salvation, at least not anytime soon.

It could take months for a judge to resolve all the questions surrounding the plant’s ownership.

And, that seems to be the least of the problems facing the horse slaughtering industry in Missouri, and nationwide.

Slaughtering of horses for human consumption could be legislatively abolished, before it has the chance to revive itself.

It was her second attempt in less than a year to bring a
slaughtering house to Missouri. But, Wallis hadn’t yet purchased the plant.

When Cynthia MacPherson, a Mountain Grove, Mo., lawyer , heard about Wallis’ plans, she looked into the plant and found a series of shell corporations and unusual transfers of the property.

MacPherson tracked down one of the plant’s creditors and sued on his behalf, asking a judge to block any sale of the plant until her client was repaid.

Plans by Wallis earlier this year to open a slaughtering house near Mountain Grove were thwarted by MacPherson, who rallied opposition through webpages and fervent pleas to the City Council.

Wallis eventually abandoned the Mountain Grove proposal, and then a few weeks later revealed plans for the plant at Rockville, about 90 miles south of Kansas City, because of its location.

“If you draw a 500-mile circle around southwest Missouri, you enclose more than 30 percent of the horses in the United States,” she said.

Now, Wallis and her business partner, lawyer Dan Erdel of Mexico, Mo., have announced strategies for a facility in eastern Oklahoma, even though state law there prohibits horses from being slaughtered for human consumption.

“When more than 80 percent of the American population opposes this practice, it’s high time we put an end, once and for all, to industrial horse slaughter,” Moran said of the provision that is part of an agricultural appropriations bill pending before Congress.

“We have no place to go with blind and crippled horses,” said Geiler. “What do you do with an old horse that will hurt you?”

But Geiler wouldn’t invest in a plant himself. “How can a person spend millions of dollars not knowing what’s going to happen with legislation?” he questioned.

Congress restored USDA’s funding for inspecting horse meat partly because of a 2011 report from the Government Accountability Office that the ban had done little to keep the nation’s horses from being slaughtered.

From 2006 to 2010, horse exports for slaughter increased by 660 percent to Mexico, and by 148 percent to Canada. Those horses traveled long distances in cramped conditions.

Reports of neglect and abandonment also rose. In Colorado alone, abuse and neglect cases jumped by more than 60 percent between 2005 and 2009.

Geiler said paying to euthanize and bury a feeble horse can cost more than $600, causing some people to turn them loose on government land.

MacPherson has emerged as an improbable leader of the anti-slaughter movement. She’s never owned a horse, nor does she enjoy riding them. But, she was appalled by the idea of slaughtering them.

When she learned about Wallis’ Rockville proposal, MacPherson discovered the plant was owned by Vincent J. Paletta, Butler, Mo.

MacPherson called “anyone who had ever touched this property,” and found Elvin Wright, who claims Paletta still owes him $20,000 for work at the plant.

Further investigations indicate deeper complications that could take considerable time to resolve through the courts.

Moreover, MacPherson has promised that she intends to lobby Missouri legislators for a law prohibiting horse slaughter.