Although the Kaw Tribe was exiled from Kansas 139 years ago, members of the Kaw Nation will return once again to their Kansas homeland to tell the story of their ancestors for the outdoor drama pageant, Friday and Saturday, Sept. 14-15, at 8 o’clock in the Old Riverbed Amphitheater at Council Grove. 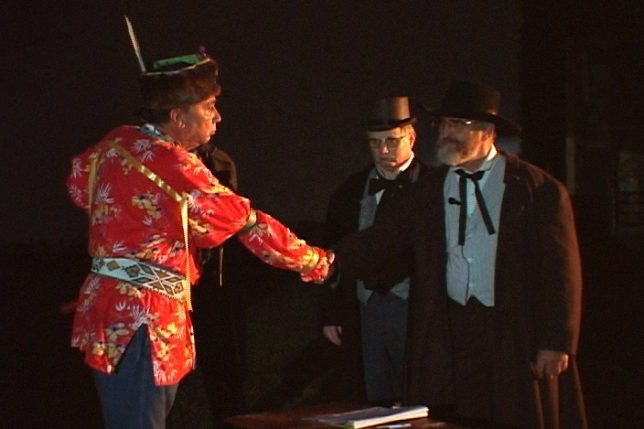 “Called ‘Voices of the Wind People,’ this will be a  multi-media presentation depicting a series of live action scenes with both Council Grove citizens and Kaw Indians,” according to Sharon Haun, pageant chairperson.

Historical artwork, photographs and paintings along with video segments are to be projected onto a large screen incorporated with early day Council Grove and Kaw village sets to bring life on the Santa Fe Trail along the Neosho River in the Flint Hills alive again.

“The pageant features an 1821 Santa Fe Trail horse-drawn pack train, wagon caravans, signing of the 1825 Council Oak Treaty, trading at the Seth Hays store, an 1859 confrontation between Kaw warriors and whites, raiding bushwhackers in 1863, and forced removal of the Kaw tribe from Kansas,” Haun said.

Production of “Voices of the Wind People” is accomplished completely by volunteer staff and performers.  Action is alternately narrated by the Kaw Chief Allegawaho and Council Grove trader Seth Hays.

Allegawaho’s narration is rendered by Luther Pepper, great-grandson of Allegawaho, while Hays is portrayed by Mark Brooks of Council Grove.

“Thirty-five Kanza Indians of the Kaw Nation, whose ancestors once lived in the Council Grove area, are expected to return to participate in this production. Council Grove area residents perform a variety of roles as early townspeople,” according to Haun.

Ron Parks wrote the pageant script in 1992, while he served as site administrator of the Kaw Mission State Historic Site in Council Grove.  “Wind People” is the English meaning of the tribe’s name.

“The script was subject to review by the Kaw Nation executive council and all subsequent changes have required the approval of the council,” Haun clarified..

“From 1821 until the arrival of the railroads in the early 1870s, the Santa Fe Trail played an important role in western history,” Haun noted. “Rather than being an immigrant trail for early settlers, it primarily served as a commercial trade route from Independence, Missouri, to Santa Fe, New Mexico.”

Remains of the Kaw Reservation, south of Council Grove, are still in place as is the historical Kaw Mission, where whites attempted to provide school for the Kaw Tribe members who lived on the reservation in the early 1800s.

This is the 20th anniversary of the pageant, with the first production 20 years ago, followed by presentations in alternating years, this being the tenth production, the last in 2010.

Sponsors are the Kaw Nation of Oklahoma, Kaw Mission State Historic Site, and the pageant committee of the Friends of Kaw Heritage.