For six decades, cowboys, cowgirls and rodeo enthusiasts have circled the first Monday of September on their calendars for the annual Eskridge Labor Day Rodeo.

“This year is no different, and a special 60th anniversary celebration is set for the rodeo, with performances on both Sunday and Monday,” according to Dean Imthurn, president of the rodeo board. 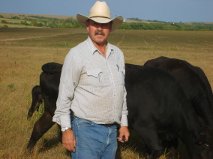 Eskridge, Kansas, is in the heart of cattle country, surrounded by Flint Hills typically-filled with cattle grazing and often with cowboys on horseback tending them.

When work is done, cowboys like to play, and what better way to entertain themselves than competing against each other doing what they know best.

That’s the way it was when cowboys Wendell Tranter, Joe Warren and Bob Widau started practicing roping in a pen they built at the west edge of Eskridge.

“Joe’s dad, Parker Warren, and attorney Charlie Waugh helped us with the construction, and we’d rope two or three nights a week. We were addicted to roping,” Tranter reminisced.

Before long, another cowboy, Eddie VanPetten, moved to the community and joined in the fun competitions. “We’d practice here and go to rodeos all around: Alma, Westmoreland, Onaga, Cassoday,” Tranter recalled.

With local encouragement, the group took on the challenge of producing a rodeo on Monday night, Labor Day, and had their first one in 1952 at the arena they reconstructed where it is today.

“The rodeo soon became a popular attraction, and then a tradition, with cowboys from throughout the Midwest competing here on Labor Day,” Imthurn said.

“There have been a lot of changes, but the rodeo is going strong. We’re working to make this year’s 60 anniversary the best ever, certainly in the Western tradition of those cowboys who started it,” added Michele Ross, rodeo treasurer.

Those cowboys produced the rodeo for several decades, and then others in the community took over leadership in the 1980s.

“I had been helping with the rodeo, and we had a reorganization of the corporation with new stockholders becoming involved after the 50th anniversary,” calculated Imthurn, who has served as president of that group all except for a couple of years.

It was in the restructuring that Ross became involved and has served as treasurer and promotions coordinator nine years. “We have 15 committee members and five directors, but it’s a community event with many volunteers who work hard every year.”

“From the original night competition, the Labor Day Rodeo became two performances, with a matinee, then a barbecue sponsored by the Chamber of Commerce, and another complete rodeo in the evening,” Imthurn related.

“Now, we have a Sunday evening performance, and a Monday matinee, which has worked well for a number of years,” Ross said.

“Originally, we had Wilbur Countryman from Cassoday furnish the rodeo stock, and then Rumford Rodeo Company of Abbyville contracted the rodeo for a long time,” Tranter said.

“However, when Rumford became affiliated with the Professional Rodeo Cowboys Association, the committee wanted to continue as an amateur competition catering to the cowboys who earned their living working cattle in the Flint Hills,” Imthurn pointed out.

“And, that’s the way it’s stayed, although the rodeo is now sanctioned by two amateur rodeo associations,” Ross clarified.

C.R. McKellips Rodeo Company, Raymore, Missouri, has contracted the rodeo for several years and will have the livestock this time for the two-day show approved by the United Rodeo Association and the Missouri Rodeo Cowboys Association.

“Local cowboys are eligible to compete, along with those who follow the circuit, in the custom for which our rodeo was formed,” noted Imthurn.

Remembering his rodeo days, Tranter recalled, “I won some calf ropings here back in the ’50s, and also a lot of the wild cow milkings.”

“We still always have special events that are especially for the locals.  We’re having steer mugging and the calf scramble this year,” Ross related.

While Tranter is the lone survivor of the rodeo founders, families of Bob Widau, Eddie VanPetten and Parker Warren continue to compete annually at the rodeo.

It’s been a long time since Tranter, 84, has contested, and even a while since he’s attended the rodeo, but Tranter’s planning to be in the bleachers this year.

“Despite some economic challenges, we’ve been able to keep the rodeo going, and the past few years have been quite successful with annual attendance surpassing 1,200,” Imthurn said.

“People don’t realize how much it takes to put on a rodeo, and we really couldn’t do it without financial support from businesses and donors,” Imthurn credited.

“We do a lot of advertising and have had great contestants and large crowds. We continue to make improvements in the facilities every year,” Ross added.