“A Cowboy” is the only way to describe Ernie Love.

He’ll be remembered immortally as just that thanks to induction into the Kansas Cowboy Hall of Fame in the rodeo category, personally announced to Love Friday afternoon. 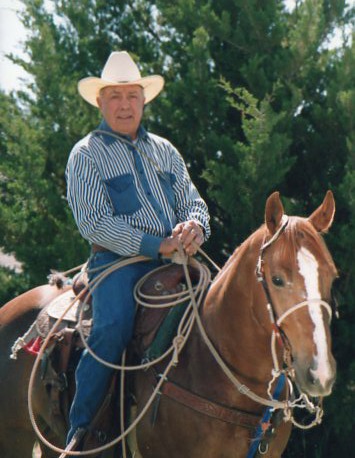 That call from Hall officials at the Boot Hill Museum in Dodge City brought a broad smile to Love, who was bedfast in his courageous battle with cancer.

Love, 78, passed away Sunday afternoon, July 22, 2012, at his ranch east of Manhattan, with family and friends at his side.

Acquaintances from his life as a cowboy, in the rodeo arena, on ranches and working with horses, cattle and young people, for which he was a mentor to the cowboy-way-of- life, had made contact with him in recent days.

Although naming of the 2012 class into the Kansas Cowboy Hall of Fame was not made officially by staff there until Monday, July 23, Love was notified ahead of the public announcement, because of his deteriorating health. Induction will be posthumously on September 15.

Whether training a colt, shoeing a horse, competing at a rodeo, judging a rodeo, working as a rodeo pickup man, gathering a stray steer, singing and playing guitar, reciting cowboy poetry, or coaching young cowboys and cowgirls at his ranch where he boarded their horses, Ernie Love fit every image anyone could envision of a cowboy.

“I lived, breathed, ate and slept to be a cowboy and to rodeo,” exclaimed Love, earlier this year.

Riding horseback helping on the family farm before he entered school, Love won his last bull riding at age 61 and placed in roping competition well into his 70s.

“The greatest part of it all is helping kids with their horses and rodeo competition in any way I can,” Ernie insisted. “I’ve always loved horses and kids, so it’s the best way for an old cowboy to spend time.”

Raised at El Dorado, Ernie always wanted to be a cowboy and milked cows by hand for a neighbor to pay for his first horse when he was nine.

Quitting school as a teenager, Love went to work for Wilbur Countryman, a Cassoday rancher. “That’s how I got started rodeoing,” Ernie said.

Several weeks one summer were spent at Emmett Robert’s Rodeo Ranch near Strong City. “I learned how to ride broncs from Mr. Roberts, and his world champion sons, Ken and Gerald,” Ernie credited.

Joining the Rodeo Cowboys Association when it cost $25 to buy a card, Ernie  contested throughout the country.

Although ranked 21st in the world bull riding standings at the time of the first National Finals Rodeo at Dallas, Texas, in 1958, Love still got to compete there, because higher qualifying cowboys drew out due to injury.

Decades after most rough stock riders would have hung up their riggings, Love plunged on in the bull riding event at Old Timers Rodeos.

“I was able to win quite a bit in the 50 and over division and was second in the nation one year,” Ernie related. “I was 61 when I got on my last bull and won.”

Proud of his Gold Card signifying his honorary lifetime membership in the Professional Rodeo Cowboys Association, Ernie judged rodeos throughout the Midwest. He also collected several titles in the United Rodeo Association.

One of his sons followed him into rodeo. “Little Ernie was a good roper and steer wrestler, being the Missouri High School champion one year,” Love noted.

When his rodeo career slowed down, Love purchased the 20-acre tract where he lived with his wife, Kathy.

“It was just grass when we bought it. We built our home and then added facilities,” noted Ernie, a “jack-of-all-trades,” who did much of the construction personally.

Born June 3, 1934, at Hutchinson, Love was preceded in death by his parents, Raleigh and Mary Love, and sisters: Darlene, Margaret and Nancy. Surviving siblings include Keith and Carol Love, and David and Elsie Love.

At his request, cremation has taken place, with ashes to be spread over the Flint Hills at a later date. A celebration of the life of Ernie Love is planned with details to be announced when completed.