Actually, there were lots of explosions during the Fourth of July weekend in Council Grove.

With fireworks bursting in the night air all around, ranch cowboys from throughout the Flint Hills had their hands, horses and lariat ropes busy with their own version of detonations in Friday and Saturday evening rodeo competition.

Thirteen ranches were represented with teams of cowboys and cowgirls participating in the 29th annual ranch rodeo sponsored by the Morris County Youth Rodeo Association and sanctioned by the Working Ranch Cowboys Association (WRCA).

With points totaled from both evenings’ performances, the overall champion was the Lonesome Pine Ranch of Cedar Point in Chase County, receiving the top payback check, and metal award plaques made by Alexander Artworks for each team member.

En route to the title earning the ranchers the opportunity to compete at the WRCA World Championship Ranch Rodeo, November 12-15, in Amarillo, Texas, the team placed first in stray gathering Friday evening, and was second in that event Saturday night, while also placing second in team penning on Friday.

Only four team members could be in the arena at any one time, but there were six listed on the Lonesome Pine Ranch roster: Captain Bud Higgs, Frank Higgs, Makenzie Higgs, Troy Higgs, Travis Duncan and Chris Potter.

Additional events which tested skills of the cowboys and cowgirls doing what their professional work is every day on the ranch included bronc riding, calf branding, and wild cow milking.

The Top Ranch Horse Award, given by the American Quarter Horse Association, went to Badger Jamey, a gray Quarter Horse gelding ridden by Doug Hall of the Broken H Ranch at Bronson. Casey Hooper of the WRCA presented the trophy.

A special tribute during the opening ceremonies recognized and honored Bobby and Wayne Alexander, lifetime Council Grove cowboys who passed away during the past year.

Lifetime cowboys and active rodeo contestants throughout the Midwest their entire lives, the well-known, most jovial, and always highly proficient roping contestants, Bobby and Wayne Alexander were inducted into the Kansas Cowboy Hall of Fame last year, and their portraits hang honorably for perpetuity at the Boot Hill Museum in Dodge City.

An additional feature in conjunction with the two-performance WRCA competition was a Saturday morning Youth Ranch Rodeo featuring cowboys and cowgirls 13 years of age and under competing in team penning, calf branding and ribbon roping.

There was a tie for second place youth ranch team honors between the Lonesome Pine Ranch, Chase County, and JC Livestock, Geary County. Tie was broken by a footrace of team members, with Lonesome Pine the winner, to collect the second place team check.

Broken H and H Cross Ranches from Bourbon County collected the second place check in the WRCA competition, placing first in both calf branding and wild cow milking in the Friday performance, and first in the ranch bronc riding on Saturday.

Information is available by calling Clay Wilson, president of the organization at 785-466-1359. 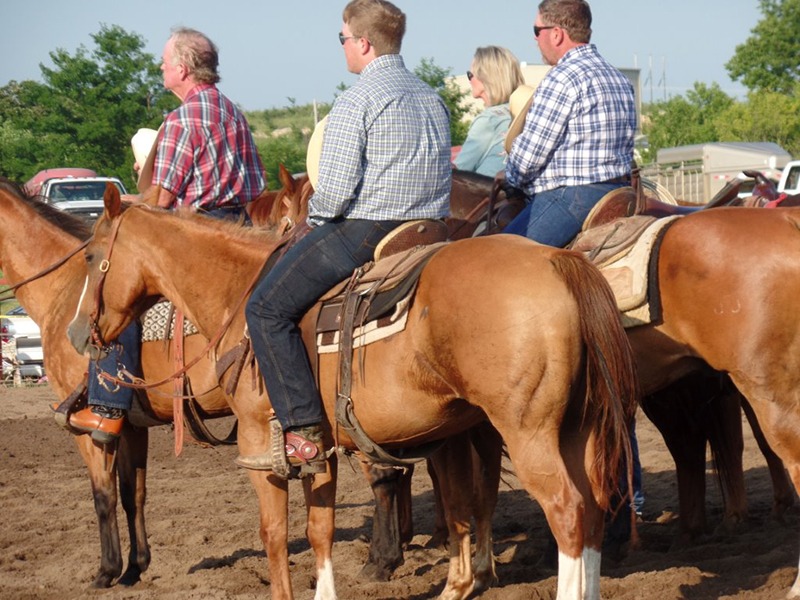