“He’s the very best and most congenial in the rodeo business of protecting cowboys and entertaining crowds.”

Everybody who’s ever met or seen the most acclaimed Wolverine in action proclaims total agreement.
It was Saturday afternoon; Salinas, California, Andy Burelle answered the phone. “I got your call this morning, but with the time difference, it was just 6 o’clock, catching a wink after last night’s performance. I just hadn’t gotten back to you.”

Before going further, essential to know: “The California Rodeo Salinas is one of the top 20 professional rodeos in the United States, the largest in California, this year, July 16-19, celebrating its 105th anniversary, more than 700 of the best cowboys and cowgirls in America, $400,000 payback, 50,000 fans during four performances.”

As the more than 14,000 in the grandstands could plainly be heard in the cellphone background, Burelle proclaimed: “Just finished one act. I have time to talk now; it’ll be awhile before the bull riding this afternoon. I’m working the barrel here today.”

Obvious verification of opening statement with no further comment required.

“As a teenager, I thought rodeo was the coolest thing ever, then went to a bull riding school, and started competing on the rodeo circuit,” reminisced Burelle, as a Salinas bronc ride completion whistle echoed through his phone.

“I was winning enough in the bull riding to stay on the road. But, then at one rodeo the bullfighter got hurt, and they asked me to fill in. I liked it, and so did the other cowboys, and the crowd, too, evidently, because I started getting calls to bullfight at more rodeos,” explained Burelle.

For a time, he continued to compete in bull riding, while also working as a bullfighter at other rodeos.

“I never really quit riding bulls, so to speak, but before long I just had so many rodeos contracted to fight bulls, there just wasn’t time to do both,” evaluated Burelle, who teamed up with Rex Dunn, Professional Rodeo Cowboys Association (PRCA) Hall of Fame Bullfighter.

“I have to credit Rex for my basic education in rodeo bullfighting, but everybody has their own style. It just keeps changing depending on the day, and the conditions,” said Burelle, known perhaps more readily as Wolverine.

“I grew up in Michigan, known for the Wolverines,” related Burelle, graduate from the Eastern Michigan University at Ypsilanti.

Burelle and his wife, Robyn, now live in Ardmore, Oklahoma. “It’s more centrally located, and easier to get to rodeos,” he admitted.

Both freestyle bullfighting and protection bullfighting since joining the PRCA in1999, Wolverine has been well rewarded by being named multiple times World Champion Bullfighter in several different rodeo and bull riding organizations.

Working bullfighting with partner Dusty Tuckness, Wolverine said, “We analyze each unique situation, and engage the bull so riders can leave the arena unharmed. We get along. It’s kind of one of those deals where you get along on and off the court.”

As a contract bullfighter, Burelle has also participated individually in freestyle bullfighting, a 70-second display of agility, coordination and courage. During the competition, each bullfighter is judged on technical maneuvers and showmanship.

“It’s the same concept as Spanish matadors, where you’re kind of dancing with that animal, and you’re showing control over him,” Burelle said. “But, we’re at a disadvantage, because we don’t have a cape. We don’t have any of that stuff. It’s all done with fakes, sharp turns, step-thrus and moves like that.”

Wolverine is frequently applauded most for his black flip over fighting bulls in freestyle competition.

The profession is not without hazards. “Oh, I’ve had my share of injuries, broken forearm, ankle, leg and back injuries, lots of hurts here and there, but that’s part of it. Fortunately, I’m still going, and the longest I’ve really ever been out of the rodeo arena was about nine weeks, which isn’t too bad, considering more than 17 years,” Burelle said.

However, Wolverine is realistic. “I’ll be 39 this fall, and I’m not as agile as I once was. I decided a few years ago, I’d better expand my opportunities, if I wanted to stay involved in rodeo,” he remembered.

Always ornery in a sense, and funny in his own unique way, Burelle decided to “get into clowning.”

Admitting, there were “plenty of challenges, but I started practicing, watching some of the top clowns around, and seemed to get better and better.”

So, Wolverine’s repertoire today is most diverse, “I still fight bulls at some rodeos, clown and work the barrel at others. One week it’ll be one, and the next, the other. That’s the way it’s been this year, and will probably be more and more that way, until I’ll probably get out of fighting bulls, as my age makes it prohibitive,” Burelle admitted.

Involved in rodeo in many different aspects, bull rider, bullfighter, and even PRCA rodeo producer, it has been a natural transition for Wolverine into contracting as a professional rodeo clown.

“I had an awesome opportunity throughout my bullfighting career to work with and observe many of the top rodeo clowns that have been in the business. I try to keep my clowning ever evolving, improving and continuously integrating new material into my acts,” Wolverine said.

“One of my goals that I strive to achieve is not telling the rodeo jokes that you hear repeatedly at rodeos. While these jokes are funny, you don’t want to lose your crowd when they hear the same jokes year after year,” Burelle noted.

“It was an extraordinary compliment when a roper came up to me after an act, and said, ‘Man, I’ve been to a lot of rodeos, and seen a lot of clowns, and you even had us laughing.”. When you have the contestants laughing, you know you are doing something right,” Burelle smiled.

Acts varies from the trendy Duck Dynasty and Jackass stunts to some old school tricks that haven’t been seen for decades. This variety shows Burelle’s entertainment versatility, being just as effective at making an audience laugh with a pantomime act as when chastising announcer commentary.

Several of Burelle’s acts also include the use of live animals, from a mini-horse and donkey to the “world’s most dangerous mini-lion.” With the help of his horse trainer wife, Robyn, Burelle has some of the most talented horses that impress the crowds and give them that extra added value of entertainment.

Excellent at promoting rodeos and visiting local sponsors, Burelle has done countless TV and radio interviews, as well as hundreds of school, nursing home and hospital appearances to promote rodeos.

Working more than 100 performances annually including some of the largest rodeos and bull ridings around the nation and continent, Wolverine started this year at the Sandhills Stock Show and Rodeo in Odessa, Texas, then the Fort Worth Stock Show and Rodeo.

“Wolverine Andy Burelle is always timely and knows the importance of recognizing all of the hard work that both committees and sponsors put forth to make a rodeo successful. He has an exceptional attitude, clean and family friendly jokes and  is ready to bring everybody to their feet at the Linn County Fair in Mound City,  Kansas,  with Friday and Saturday night performances, Aug. 7 and 8, starting a 8 o’clock,” welcomed John Teagarden, longtime Linn County Fair Board member, and the PRCA rodeo coordinator-promoter.

While he enjoys playing golf and hunting in spare time, Burelle sees a lifetime career ahead of him in the rodeo arena.

“Lecile Harris is 78-years-old, started working rodeos when he was 18, celebrated his 60th anniversary as a rodeo clown this year. I think I’ll still be going strong at that age,” predicted Wolverine, who does have a realtor’s license for backup income when he gets an infrequent day off the rodeo trail. 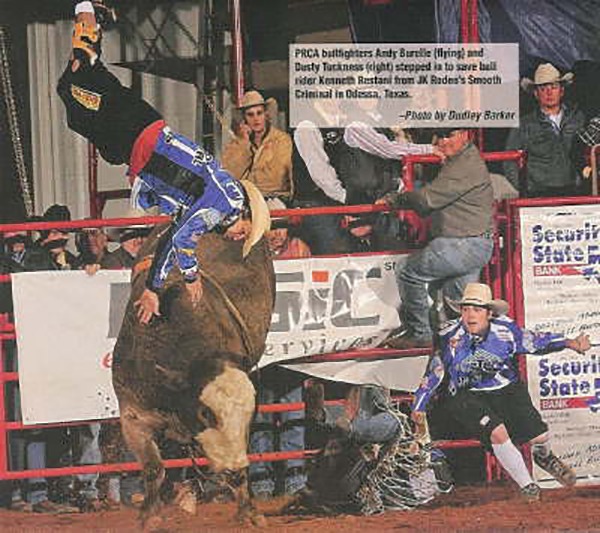 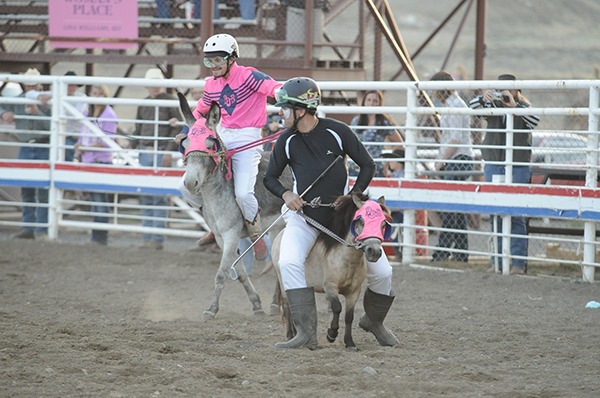