“It will be his first rodeo.”

Many people get excited about attending rodeos, especially those who’ve never had the experience before. But, the Eureka Pro Rodeo, Saturday evening, Aug. 15, at the Eureka, Kansas, Saddle Club Arena, will have even a much more special meaning to one little first time attendee. 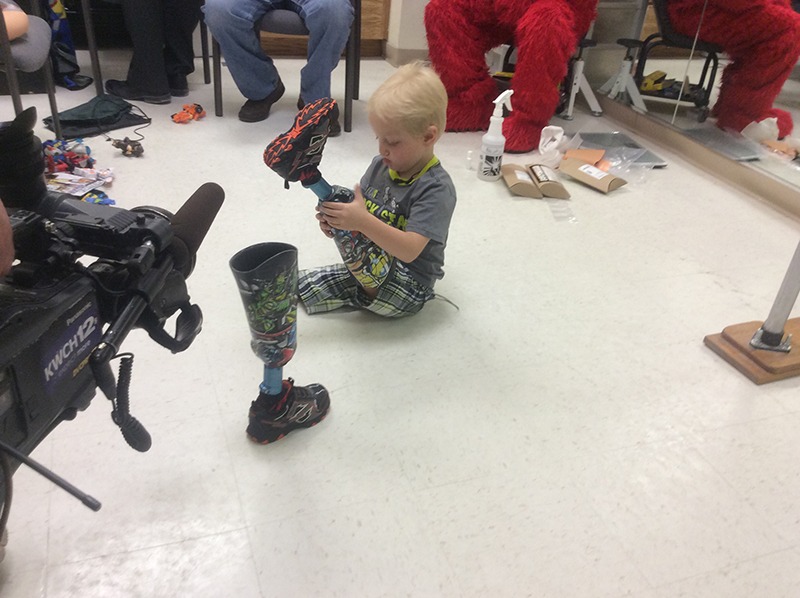 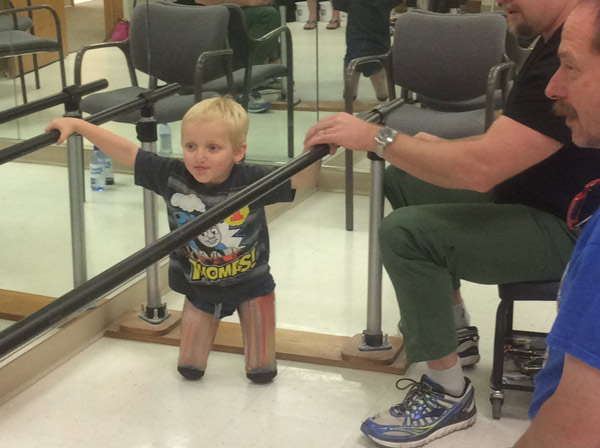 Five-year-old Landon Lacy, a double leg amputee, is to be in the spotlight as Shriners Honoree during the rodeo recognizing treatment he’s received from the Shriners Hospital.

Actually, Landon is really known best as “Bear,” because he’s been “as tough as a bear” ever since being born with multiple birth defects, according to Grandma Dana Horning.

“We knew Landon was going to have to be strong to live, and in everything encountered in his every day journey. Bears are tough, so we’ve always called Landon, ‘Bear.’ He is tough, that’s for sure,” Grandma Dana verified.

Among Bear’s birth defects were prominent webbing of his legs preventing extension, with ankles webbed backward, along with a cleft lip, and other malformations.

“There were more than 30 corrective surgeries done on his legs at a local hospital, and most of them were unsuccessful,” explained Grandma Dana.

Then, Bear was taken for evaluation at Shriners Hospital in Chicago. “We were concerned whether they wanted us, because of the uniqueness of the abnormalities, with only 90 known cases in the world, and also because of the problems in earlier treatment efforts. Fortunately, the hospital wanted to assist, and doctors scheduled a double leg amputation,” Grandma said.

That surgery on February 10, this year, “went well,” and Bear came home a week later. “But, staph infection developed in both ‘stubs,’ caused in part by scar tissue from previous surgeries, making healing difficult,” Grandma related.

Consequently, Bear was entered back into the hospital burn unit for a month, with several additional clean out and graft surgeries, before wounds finally healed by the end of March.

Obviously, Bear has endured “horrible pain,” but was first introduced to “transformers,” when he was three-years-old. “That’s when Bear figured out how the artificial legs work, and he asked if he could have his crippled legs removed, and replaced with ‘transformers.’ We said sure that’s what we are going to try to do,” Grandma recalled.

Difficult perhaps for those who’ve never endured such lifetime hardship, Bear was “excited and could hardly wait.”

Facing another operation bravely, as always, “Bear had the biggest smile ever when he awoke from the procedure, his deformed limbs gone, and he wanted his new transformer legs, right now,” Grandma affectionately recalled.

It certainly wasn’t quite that fast, but now several months later, and more hard work by Bear and his family, the young man “has legs.”

“Steve Peeples with Peeple’s Orthotics and Prosthetics made the transformer legs happen. Bear is learning how to walk again,” Grandma proudly announced.

Everybody is Bear’s friend, and he’s always excited to make new acquaintances.
“Bear loves people, doctors, and nurses. He loves them to let him do his own needle injections,” Grandma informed. “He enjoys performing tricks for people, playing with children, swimming,  and being in parades.”

Interestingly, yet understandable, Bear’s favorite toys are “anything to do with transformers.”

He’ll even sadly miss the Eureka Pro Rodeo Parade Saturday morning, because he’ll be at the transformer convention in Wichita. “ Bear lives for transformers,” Grandma admitted.

Obviously, Bear has watched considerable television in his short, but hard life, and anticipates watching his favorites shows: SpongeBob, Paw Patrol and Curious George. “His best friends of all are the cartoonists from the Wichita Shrine Temple, especially Elmo,” Grandma noted.

When Bear found out he was going to the rodeo, Bear’s excitement bounded with anticipation, and he wanted to see a horse ahead of time, which his family accommodated, further enhancing keenness for rodeo time.

Procedures are going to be required for the large and unusual opening in Bear’s cleft. “Doctors at the Chicago Shriners Hospital have been studying the ailment, and have come up with ideas for treatments that have been rarely accomplished. Anyway, Bear will be going back to the hospital in late August to meet with the team of doctors to decide when the ‘pretty radical’ surgery will be done,” Grandma said.

First things first, Landon “Bear” Lacy is attending his first rodeo Saturday night at Eureka as the Shriners Honoree. “Bear and all of us are excited about the rodeo, but most of all so thankful for everything the Shriners Hospital, the Wichita Shrine Temple, and all Shriners everywhere have done for Bear and our family,” Grandma appreciated.

“He is loved by so many, and because of this, it has made our lives so different. We realized we are not in this alone. Bear has a Facebook called ‘Bears Buddies,’ where people  can follow his life’s journey. Bear has friends from around the world, including several different countries,” Grandma added.

With all of the hardships Bear has endured, there’s never been any remorsefulness. “Bear is so very special in so many, many ways. He’s always had the ‘I can do anything attitude,’ and generally does,” Grandma assured.