“This queen can ride a horse.”

Abbey Pomeroy of Hesston has been busy in Las Vegas, and the Hesston native’s not been at the slot machines.

The petite blonde cowgirl represented Kansas in the Miss Rodeo America Pageant in conjunction with the National Finals Rodeo.

Out of 33 contestants all big hats, big smiles and shiny cowgirl boots from around the country, Pomeroy as Miss Rodeo Kansas 2015 was named first runner-up to newly crowned Miss Rodeo AmericaKatherine Merck, Miss Rodeo Washington, from Spokane and a Gonzaga University law student.

Proving her true cowgirl abilities, Pomeroy was most significantly recognized as winner of prestigious Horsemanship Award, an honor old timers generally consider more significant than being able to “just look like a pretty cowgirl.”

The horseman competition is a vital part of the pageant, because rodeo queens are introduced during rodeo performances, ride horseback in parades and makes countless other appearances on and with horses.

During the Las Vegas, competition, contestants draw for the horses they will compete on in each of the two rounds of horsemanship competition. These horses belong to Professional Rodeo Cowboys Association stock contractors, and so are unfamiliar to the contestants. The cowgirls on horseback then perform one of the three set horsemanship patterns and one freestyle pattern.

The top five contestants each answered a question about challenges faced by the rodeo association and possible solutions.

During the coronation, the emcees asked questions and joked about the amount of makeup and hairspray used during the week of competition. Unlike in other pageants, contestants do their own hair and makeup.

A special scrapbook contest chronicling the campaigning queen’s state reign was an additional pageant feature, and Pomeroy came away the winner there as well.

Of course, there was more than ample material to incorporate in her stuffed queen’s “scrapings.”

Pomeroy served as the Miss K-State Rodeo in 2012, and continued her interior design education at Kansas State University, before being crowned Miss Rodeo Kansas 2015 during the Dodge City Rodeo.

At the state pageant, Pomeroy earned the horsemanship, speech and modeling awards. As the First Lady of Rodeo for the state of Kansas, Pomeroy has traveled the state and country promoting the sport and the western way of life.

“There is so much character, history and tradition in rodeo that today’s generation needs to know about,” Pomeroy emphasized

During her time as a college rodeo competitor, specifically in barrel racing, Pomeroy became deeply immersed in a community where the qualities of independence, responsibility and camaraderie were cornerstones. She desired to be a giving part, an ambassador of and for that same community.

The daughter of Jerry and Dixie Pomeroy, the rodeo queen and her three siblings, Jason, Michelle, and Emily, were raised on a farm near Hesston, Kansas.

Now a K-State graduate with an interior design degree, Pomeroy served as president of the Student Design Group and served as their community wide Fair Trade Marketplace coordinator.

A member of the cooperative living house, Alpha of Clovia, Pomeroy was active in her local Harvey County 4-H Club.

“Rodeo is the only sport built on tradition of a livelihood that was essential to development of this country,” Pomeroy stressed. “Those cowboys and cowgirls who have competed in rodeos from the beginning up through all levels today have a contagious personality, mentality and passion so important to be shared with others.”

“Hard work always pays off,” Pomeroy admitted. “I knew I had to be ready, and I felt confident, but to hear my name announced was such a thrill.”

“My parents and brother and sisters all are involved with horses, but I’ve taken my interest to the highest level,” Pomeroy contended.

Showing horses while growing up, Pomeroy was “an English rider,” who traded her flat-saddle for Western tack and attire to become a “cowgirl and rodeo queen.”

She recalled, “I competed in 4-H and Morgan shows with my chestnut Morgan mare called Gates, mostly in rail classes and over low-jumps.”

Despite achieving success including blue ribbons and state fair awards with her Morgan-style, Pomeroy had that inward-desire to “go Western.”

When a sophomore, and the 2012 K-State rodeo queen, Pomeroy spent four hours day on horseback to stay in top competitive form. As a senior, she spent her fall semester studying in Australia then graduated with a plan to work in the area of sustainable design.

But her love of travel and rodeo called, and Pomeroy decided to postpone her career to vie for the state and national rodeo titles. She has spent the past year riding and taking lessons, when not on the road attending rodeos and spreading the word and image about rodeo.

The rodeo queen also fell in love with interior design at K-State. “We learned to always think about human needs. It is so people oriented,” she said.

When not on horseback, Pomeroy can be found crafting special leather creations or with close friends, rock climbing, canyoneering and exploring the outdoors.

When she starts her career, Pomeroy won’t abandon her love of the outdoors or her boots.

“Being on a horse is a happy place,” Rodeo Queen Abbey Pomeroy insists. 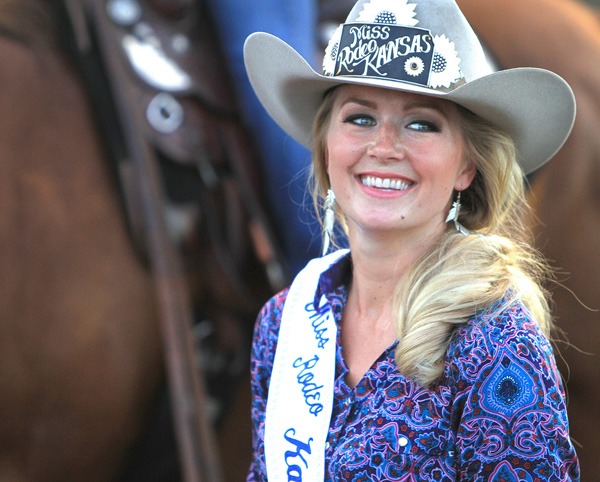