“Strike a match, and the whole countryside’s ablaze.”

For those who’ve never experienced the annual spring sky brightening inferno of the Flint Hills, they can’t comprehend factualness of that simple statement. 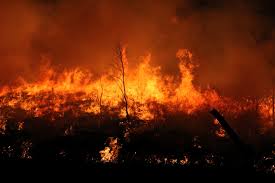 “With all of the feed this year, there’ll be more burning native grasslands than for some time,” contended Mike Holder, Cottonwood Falls, longtime Chase County agricultural agent and Flint Hills Extension District director.

For lay understanding, “feed” means the Big Bluestem and its complements were lush last summer with grazing season end’s leftovers that’ll further increase fire intensify when ranchers put grassland management techniques to work in the next couple of months.

With that, there’ll be more smoke; too, creating alarm among certain environmentalists concerned about air pollution as haze, smell, sometimes even cinders linger long into heavy urban populations.

“Burn dates vary according to locale and what land managers’ objective is, but mid-to-late April typically sees the highest percentage of Flint Hills fires,” stated Holder, who assists in monitoring after effects as part of the Flint Hills Smoke Management Plan.

“There’ll sure be some issues come up again, but ranchers are the best stewards of the Flint Hills. Their livelihood depends on proper management,” Holder insisted.

Walt Fick, professor and Extension rangeland management specialist at Kansas State University in Manhattan, said “Native grassland conditions and weather influence prescribed burning, but ranchers in southern border counties will begin in early to mid-March and pasture burning will work its way up to the northern Flint Hills into early May.”

Clarifying that the brush like buckbrush and hedge should “be leafed out” for most positive results from burning, Fick said, “Eastern red cedar is the exception; fire is effective at any time.”

Cow-calf pairs don’t have the notable gain advantage from burning pastures, but it’s still advantageous to clean up undergrowth and work to keep ahead of intruders, the specialist said.

“Patch burning” in the spring, when about one-third of a pasture is singed each year in rotation, has not lowered cattle gains, while providing alternative roughage during regrowth, before stockers return to it for the lush, higher protein foliage.

Reduced numbers of greater prairie chickens as well as other bird species, important pollinating bees and butterflies are sometimes attributed to destroying nesting by burning. “Patch burning does leave habitat for them,” Fick said.

Intensive fire during the summer helps in management of hedge and locust tree intrusion, Fick said, but herbicide treatment is generally a necessary supplement to burning.

“Remedy Ultra works well for basal stump treatment on hedge, and Milestone is recommended for locust, although locust is a lot more difficult to control,” Fick said.

Expansion of the noxious weed sericea lespedeza is a continuing native rangeland problem that is not deterred by fire in general, according to the expert.

“Burning is a necessary practice of grassland management, but it’s important that landowners take the time to prepare, have the right equipment, enough help, and pick the right weather conditions to conduct the burn,” Holder emphasized.

“Counties vary on what they require for controlled burning. Some require a permit; others just give permission the day of the burn. It’s best to find out from the sheriff’s office before striking the match,” Holder advised.

Kansas courts do not impose a rule of strict liability for prescribed burns. According to the Kansas Court of Appeals, “In Kansas, farmers and ranchers have a right to set controlled fires on their property for agricultural purposes and will not be liable for damages resulting, if the fire is set and managed with ordinary care and prudence, depending on the conditions present.

“There is no compelling argument for imposing strict liability on a property owner for failing to prevent the spread of a fire that did not originate with that owner or operator,” the court decision states.

“Additionally, producers are asked to voluntarily refrain from burning on days when smoke could have large impacts on air quality,” Holder said. “Smoke model forecasts for a specific burn location, are on the smoke management website at www.ksfire.org.” 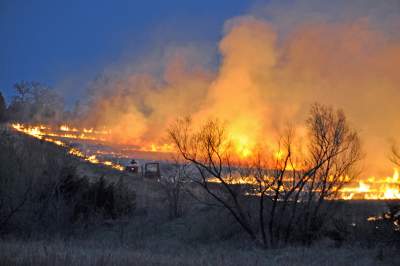 “Only about a fourth of April days are suitable for burning, because of weather conditions. Temperatures need to be between 50 and 80 degrees, winds between five and 15 miles per hour in desirable directions, and the humidity between 40 and 70 percent,” Fick said.

“Careful consideration of the fuel type, local topography and nighttime weather conditions when conducting a prescribed burn can assist in making decisions that will avoid the deadly movement of smoke and smoke/fog combinations into sensitive areas, increasing the safety of the burn crew and the public,” Fick concluded