Simple statement, while “everything for everybody” is much more complex, yet truly accurate summary of the EquiFest of Kansas set this weekend in Topeka.

“There’ll be attractions for anybody who has ever had even the slightest affection for horses,” exclaimed Ann White, EquiFest of Kansas manager.

Set for the Kansas ExpoCentre in Topeka, the 19th annual EquiFest of Kansas has been proclaimed the state’s “Premier All-Breed Horse Fair and Exposition.”

There’ll be three jammed-packed days of features, Friday, Saturday and Sunday, Feb. 26-27-28, utilizing all of the ExpoCentre facilities, starting early every day and going well into each evening, with a climaxing ranch rodeo late Sunday afternoon.

“The momentum has been incredible.  We’re very excited about EquiFest this year,” said White,  who has been working diligently to make this year’s “horse affair” the biggest and best ever.

“EquiFest originated in 1997, when the Kansas Horse Council (KHC) saw an opportunity to bring equine enthusiasts together for a weekend of all types of horse activities,” explained White, longstanding KHC member, and in her own right a most successful trainer of horses and riders at the Vermillion Valley Equine Center, Belvue.

Serving as the main fundraiser for KHC’s educational programs, promotions and public policy advocacy, EquiFest has been moved to Topeka after 18 years of success at the Wichita Pavilions, which changed direction of operations, forcing EquiFest to be relocated.

Consideration was given to several venues in Kansas, before it was decided to move to the Kansas ExpoCentre at Topeka.

“The response from people about our move to Topeka has been overwhelming,” White said. “The city recognized the economic impact of hosting such a great event and has been extremely helpful in our transition.”

Repeating: “everything for everybody” is the only way to completely yet concisely detail what EquiFest of Kansas actually entails.

Headline clinician is Dan James, who was born in Queensland, Australia, and began his lifelong passion with horses at a young age.  Recognized as a world class colt trainer, James wowed judges with his incredible training techniques, winning the coveted Road to the Horse International Colt Starting World Championship. 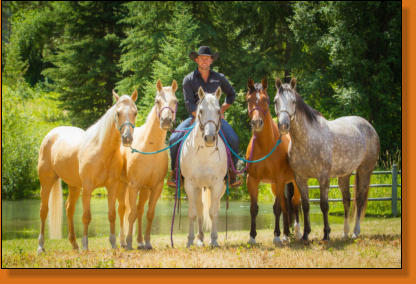 “James continues to push the limits of horsemanship and entertainment with eye-opening clinics and exhilarating performances,” White said.

Diane Carney, Chicago, has been training, judging and teaching professionally for more than 35 years, successfully exhibiting hunters and jumpers.

“Discipline with a sense of humor” describes Carney, whose “hard work with  positive outcome” is her teaching philosophy.

Yvonne Barteau, Maple Park, Illinois, is a lifetime horsewoman, who has worked with race horses, Western riding, hunters, jumpers, Equine Theater Productions, and has written several equine-related books. She’s trained a dozen horses to the Grand Prix level while her students and horses have won a multitude of  awards at all levels

“I’m excited to have live feed television screens, so those in attendance can view the arena programs inside with more comfortable seating,” White said.

Attendance at EquiFest of Kansas is expected to be more than 15,000 people, representing a wide range of disciplines and age groups from throughout the Midwest.

EquiFest doors open Friday morning, Feb.  26, at 9 o’clock, and at 8 o’clock,   Saturday and Sunday mornings, Feb. 27 and 28. Doors close following the evening entertainment  Friday and Saturday, and EquiFest of Kansas 2016 ends after the final performance of the ranch rodeo, late Sunday afternoon.

Passes will be available at the door daily, with discounts for purchasing weekend passes,  plus lower rates for youth, six to 12, and children under five are admitted free.

The only way to know what’s going on, and attempt to not miss anything is by checking out the schedule at www.equifestofks.com.