The cowboy world has truly lost one of its very own. 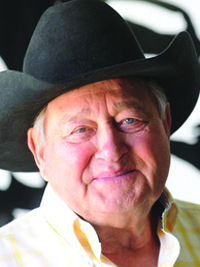 His cowgirl business partner Carol Martin was a passenger in the vehicle and suffered multiple injuries.

Driver of the other vehicle failed to break at a stop sign driving into the path of Bronco Billy, headed south on Highway 75, and was pronounced dead at the scene.

“Carol is out of the hospital, and is recovering,” according to Laurie Staton, vice president of marketing and sales at  Bronco Billy’s Arena and Tack, Council Bluffs, Iowa, Saturday morning.

Best known for his big cowboy smile, friend of all, and generosity to all horse and rodeo oriented, Bronco was a fixture at horse events throughout the Midwest and was pulling his most familiar Bronco Billy’s trailer packed with saddles and horse related merchandise for sale at the EquiFest.

While hosting horse events at the Iowa business location, Bronco Billy was also recognized for the custom made saddles he designed specifically for the horse and rider combination.

“Fit, quality, looks and personalized customer service are the expectations from Bronco Billy’s full line of equine products to satisfy everyone from pleasure riders to professional competitor,” Staton said. “With Bronco Billy’s knowledge and expertise, we have developed high quality saddles and top of the line tack at great prices. We have everything for the horse and rider.”

Bronco Billy prided, “We have the largest used saddle inventory in the area,” and was always anxious to trade a saddle or a horse.

One such product demanded by Bronco Billy customers was the big round bale hay nets. “They save us lots of hay and lots of dollars. They’ll pay fast return for the investment in just a few bales,” Bronco Billy said.

Whether it was a rodeo, horse show, jackpot or youth activity, Bronco Billy’s generosity always showed through in providing special awards, and his big proud cowboy grin was anxious to pose with the proud award recipients.

Born January 13, 1936, at Thurman, Iowa, James F. Hunter, at age eight, was baptized into the Reorganized Church of Jesus Christ of Latter Day Saints and was lifelong strong in his faith, according to all who knew him.

After high school and a year of college, Hunter married his first wife Sheryl, and they were the parents of three children.

In 1966, Hunter moved to Council Bluffs, and went into the real estate business as co-owner of Hunter Realty with his brother, Mark.

Hunter attended the Missouri School of Auction and was active in the auction business through the country. Additionally, Hunter Trucking, an interstate transportation line, was formed with another brother Joe.

“Jim and Carol shared a passion for rodeo, having 75 years of rodeo and equine knowledge between them,” Staton said.

“Jim was a kind, caring and funny man, and I know he will be missed by so many,” expressed by one, and the feeling of whoever crossed trails with Bronco Billy.