Dad’s saddle was hanging on a garage rafter ever since we can remember.

He’d kept it as sole reminder of his horses when moving to town after having a farm sale in the mid-’40s. Dad (Clarence Buchman) was a cowboy, without a horse, but always proud of his saddle.

Promise to us from day one: “It’s your saddle when you get a horse.”

That’s the way it was when we got Spot in 1962. Dad’s saddle came down from storage and put to use. As delighted as we were to have a horse and saddle, looking back, our feelings likely were incomparable to those of Dad’s reminiscing about his saddle.

Sadly, we never asked much about the saddle, rather than knowing it was close to Dad’s heart.  So wish we knew know when and where Dad got the saddle, the cost, and some horses he’d ridden with the saddle.

Now more than 54 years later, we’ve found out information that Dad probably didn’t even know. And, if Dad’s saddle could just talk, oh the stories it would tell.

Essential to embarrassing now admit “Dad’s ‘old’ high backed saddle” was different than most “cowboys” rode, and we wanted a “new saddle.”

When we got Nellie Belle, after Spot foaled, Dad bought us a saddle; happy to have “his saddle” back, so we could ride our horses together.

After Dad’s passing we kept his saddle, although we didn’t use it. When doing the tack room cleanout several months ago, Dad’s saddle again came off the rack, likely seeming valueless to most.

Knowing its high sentimental worth to Dad, carrying over to us, we asked a leatherworker to restore the saddle.

That’s when the “rest of the story” was revealed. Knowledgeable and inquisitive about old saddles, the leatherworker found the saddler maker’s name and serial number on Dad’s saddle and suggested we contact Hamley & Company, still in business in Pendleton, Oregon.

A call there verified Dad’s saddle Hamley Number 237, had the serial number 2890, when completed on August 22, 1919, according to original saddle records of Hamley & Company.

Verifying that the records are “as complete as available,” Parley A. Pearce at Hamley & Company, 30 Southeast Court, Pendleton, Oregon, 97801, signed a Hamley & Company Saddle Certificate of Authenticity on April 11, 2016, verifying Dad’s saddle’s heritage.

While it  likely  looks different than coming off  original saddle maker’s rack, Dad’s saddle today looks almost exactly like when as an 11-year-old we first threw it over Spot’s back .

That’s special thanks to dedicated, tedious work of saddle collector Larry Browning at the Circle B Bar Ranch near Emporia.

There’s new sheepskin lining, new saddle strings, and the leather’s been cleaned, softened, and oiled to perfection Dad would again be as proud as we are of it displayed in our ranch home den.

Noticeable only by knowing inspection is the leather indention roped-burned into front of the tree when a naïve want-to-be cowboy kid roped that hedge corner post from Spot’s back  running as fast as she’d go. Spot’s abrupt stop when the saddle-tied lariat came tight with the solid-set-post still makes us jar and smirk simultaneously these decades later.

The Hamley family history goes back to Cornwall, England, where the trade of saddle craftsmanship had been passed down through generations. The America history began in 1840, when William Hamley came to Wisconsin to open a leather shop.

His sons, J.J. and Henry, moved to Ashton, South Dakota, in 1883, and established Hamley & Company, moving to Kendrick Iowa three years later. Business was good, but structure fires forced relocation up the Oregon Trail, to the building in Pendleton where saddle making continues today.

In 1919, Hamley & Company produced the “modified association saddle,” as a solution to “level the playing field” for rodeo saddle bronc riding competition, and the saddle-style continues in use by champions.

With ownership further from roots, business struggled for a time until Parley A. Pearce and Blair Woodfield acquired Hamley & Company in 2005,  to again operate as originated.

The Hamley Cowboy Catalog assures “Quality articles made for men who are tired of the extravagance of buying cheap things.” 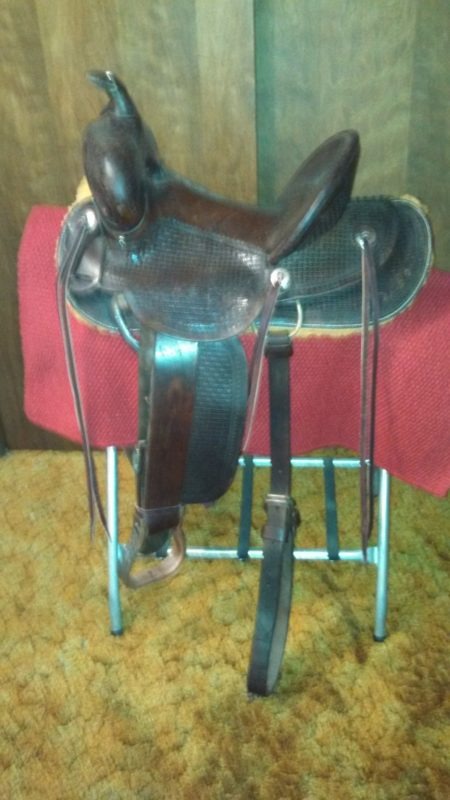