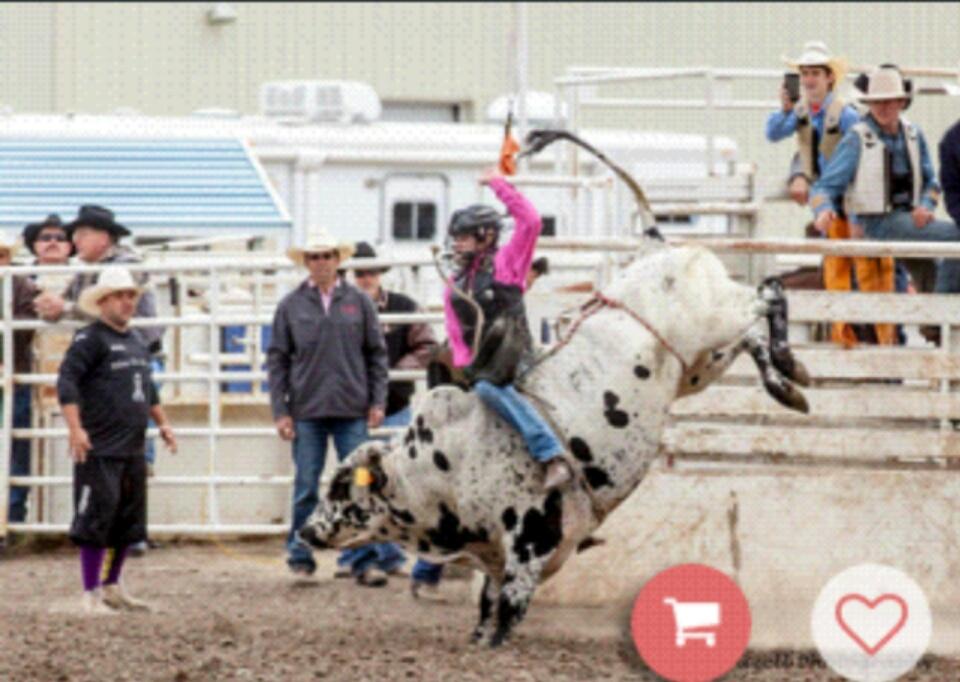 “They sure didn’t get their drive for the sport from me or their dad. Neither of us was ever involved in rodeo, until our kids became interested” evaluated mom Ruth Dees.

“Brylen has been attracted to bull riding ever since he was very little. His older brother Tyler is his idol. Tyler rode bulls, and Brylen wanted to follow in his boot steps,” Mom continued.

“Now, Shayla she’s a wild one, has natural ability with horses, rides to win and gets upset when she doesn’t,” proud mother critiqued.

Preston and Ruth Dees of Paola are parents of seven children, ages 30 to 12. “I’m a stay at home mom. Preston is a construction supervisor, and our children are home schooled,” Ruth said.

While final results may not have been as hoped, Brylen and Shayla, representing the state of Kansas, made strong showing at the recent 2016 National Junior High School Finals Rodeo in Lebanon, Tennessee.

“Brylen was first going into the short-go-round, and needed to mark 65 points to win the bull riding,” Mom reflected. “His bull stopped, and judges marked the ride a ‘30,’ with option of a reride.

“Brylen would have been forth if he’d taken that score. But, Brylen said he came to win, took the reride bull, and got bucked off at 5.6 seconds, ending up seventh.

“It was a heartbreaker, but Brylen is a real cowboy, looking to get on the next bull and win that bull riding,” Mom Ruth insisted.

No problem getting his steers covered at the junior high finals, Brylen was disappointed he didn’t draw any deeper and tougher, so his scores were out of the placings.

“Shayla really did great, ran the poles in 21.6 seconds, then ran 21.1 seconds. But, the competition was super tough, and Shayla ended up 31st. She was disappointed, of course, but Shayla and Little Bit did very good running against the big horses.”

Kickoff for Brylen’s bull riding came as a four-year-old when he started competing in sheep riding. “He began riding steers in the Christian Youth Rodeo Association (CYRA), then junior bulls, and now Brylen is riding big bulls,” Ruth said

The young cowboy finished as reserve champion in the Kansas Junior Bull Riding Association giving Brylen the opportunity to compete at the Youth Bull Riding Word Finals the first week of August in Abilene, Texas.

Interesting, Brylen is a one-event-cowboy. “He doesn’t ride horses. Brylen has never had any interest in anything except being a bull rider,” Mom said.

Practice makes champions, and Brylen mounts practice bulls at the Homestead Rodeo School near Richmond. “Brylen exercises with daily routines, and we also have a bucking barrel for practice,” Ruth noted.

Looking to the fall, Brylen’s concentration is on the Kansas High School Rodeo Association, intending to be a bull riding winner, advancing to national competition.

With natural horsemanship abilities and desire, Shayla trained a miniature horse to ride, and feels fortunate to have acquired Little Bit four years ago for rodeo competition.

“As fast as Little Bit is, she’s getting outrun by bigger horses. So, Shayla plans to sell her Welsh pony and buy another rodeo horse,” Mom said.

The family bucking bull operation began when Ruth inherited a beef cowherd from her father-in-law. “I got a Charlie Plummer bucking bull and started raising buckers,” she said.

Now, in the eighth generation, the cowherd is intensely bucking bred and mated to top line bucking bulls. “We have a dozen bulls, five to eight years old, that we haul to rodeos and bull riding events,” Ruth said.

There are another 30 bucking bull prospects in the pasture; menagerie of color, size, shape, with big horns, small horns, muleys, big humps, little humps, and no humps.

No slowdown in sight for the Miami County rodeo family. “We all have big expectations. Of course, Brylen is excited about moving into high school competition, and Shayla is anxious to get a bigger, faster horse to ride in every event.