The horse world has lost one of its very best.

And to the very last, he was doing what renowned for and loved more than anything.

That is than adored spouse Daisy who preceded his passing.

Likely it was a grand reunion as the couple rejoined. 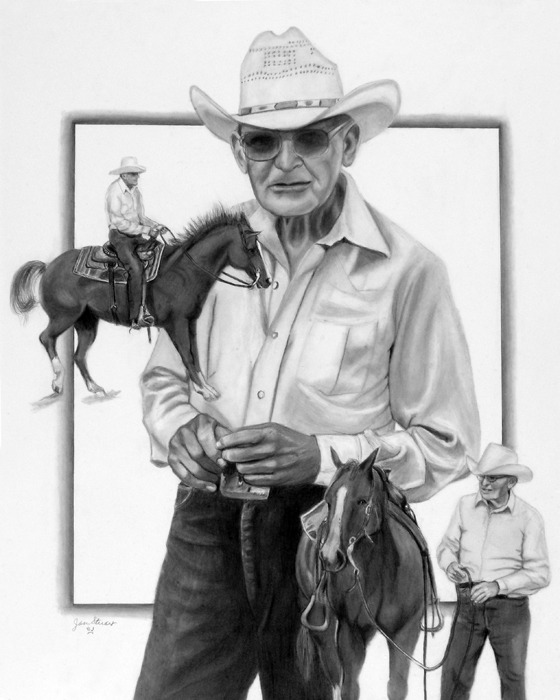 Cause of passing is uncertain, but Ballweg was riding at the Saddle and Sirloin Club, Kansas City, which he did every day expect Sundays.

“No one knows exactly but whatever, John was suddenly dismounted from his horse,” according to Dave Webb, longtime friend and eulogist for  services Friday, Aug. 5.

Reports are that Ballweg announced: “I just got bucked off, but I landed on my feet.”

Certainly don’t ever insinuate the true cowboy was “bucked off,” which would still offend him, yet doubtful,  even though he’s the one who said it.

An ambulance took Ballweg to the hospital, and he succumbed early the next morning.

“The important thing is John was riding a horse when his final time was at hand,” Webb insisted.

The couple moved to the Kansas City area in 1954. Ballweg has always been a fulltime horse trainer, still riding four to six horses every day.

According to John Teagarden, La Cygne, “During his 12 years at the R S Bar Ranch, John trained and campaigned a number of AQHA Champions, including 10 sired by Sutherland’s senior sire, Paul A, an AQHA Champion in.  his own right.

Ballweg often said he made champions when a cowboy showed a horse all day in every division.

Unlike specialization in much of today’s show ring competitions, Ballweg entered a horse in halter classes in the morning, performance classes during the day, and  cattle classes at the end of the day.

In 1966, Sutherland’s emphasis turned to raising and racing Thoroughbreds, and Ballweg opened his own horse training operation. He continued to train and show more national champions in all breeds “on his own terms.”

Since “semi-retirement” at about the turn of the century, Ballweg has continued to “leg up and tune up” horses for members of the Saddle and Sirloin Club.

“We can tell when it is really cold out. John might not show up until 9 o’clock in the morning,” stable officials admitted.

Ballweg  continued helping with cow herds in northern Missouri. He was  the head cowboy for the crew that settled cattle at area cuttings and ranch rodeos, a fixture at American Royal horse events.

Ballweg was “recognized for his integrity, work ethic, skilled hands, and ability to read each horse and rider to make them better in his quiet but confident manner,” Webb insisted.

“John had many dear friends in Kansas City and around the world. John always contended I ‘was blessed to have been a first-hand witness to many of the top hands and their horses,’ either competing against them or judging them,” Webb commented.

Ballweg was quoted in a Quarter Horse publication just four years ago: “I may be old school to some of the younger crowd, but I’m still hard at it. I’m still teaching, and I’m still learning. And that’s how I like it.”

Services were conducted by Webb at the Bruce Funeral Home in Gardiner.

“The chapel was overflowing, with pickups, horse trailers, stock trailers, Lincolns and Cadillacs in the parking lot. They came from all walks of life from all over the Midwest to honor John Ballweg,” Webb said.

Burial is set Tuesday, Aug.  9, in Mansfield, Texas. Webb will fly there for Ballweg’s interment beside Daisy, who passed away in 2004.

Also preceding the horseman in passing were his parents and three sisters.

He is survived by nieces, nephews and long-time friend and caregiver Vinita Canright, as well as horse friends and acquaintances around the world.

A special gathering honoring John Ballweg is planned at the Saddle and Sirloin Club, September 10th.