American wild horses are suffering due to rangeland overcrowding, which has led to starvation and death.

Many people are unaware of that fact pointed out by Forrest Lucas at a recent farmer-rancher meeting in Ottawa. 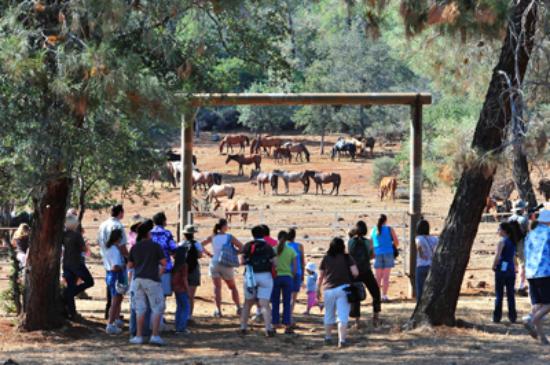 “Radical animal groups would have you believe that these horses are thriving in the wild and that they should be left untouched,” said Lucas, who formed the Protect the Harvest organization.

“The sad truth is that there are far too many horses, and having no natural predators, their numbers have outpaced the food and water available to them,” Lucas exclaimed.

“We have the opportunity and obligation to protect them from long and painful suffering by controlling their numbers,” Lucas declared.

With vast business operations including Midwest ranches, Lucas has put his affluence where his heart and philosophies are.

Dilemma of wild horses is shared in Lucas’ Protective the Harvest website.

The Bureau of Land Management (BLM) has failed to keep the horse population under control. Despite an enormous budget, there are too many horses for the BLM to roundup.

Shelters are full. Adoption centers are failing to distribute the feral animals.

Prime rangeland have been turned into barren plains. Animals once dependent on these lands are dying.

American ranchers are being pushed off their permitted land, and the world is losing food production.

Hands of ranchers and citizens are tied as laws stop individuals from feeding or watering wild horses. BLM and animal rights groups are not helping these horses.

Horses entered North America with the Spanish conquest. There were just 15 horses with the Cortez expedition in the early1500s. A few escaped horses expanded to millions within 150 years.

Wild horses are classified non-native, meaning the American West is not the natural habitat for these horses.

With no natural predators and no true place in American lands, wild horse mismanagement has contributed to destruction of important ecosystems and ultimately the land.

In 1971, the government took control of the management of wild horses.

For a while, BLM was able to maintain appropriate numbers of wild horses the land can sustain.

Now, with size of feral herds doubling in four years, this is environmentally dangerous.

Before 2007, a viable way to manage wild horse populations was processing. After inspectors for these facilities were defunded, there was no place for the feral horses to be sent inside the United States.

Activists are making the problem even worse, through the misleadingly-named group: Wild Horse Education (WHE).

An ultra-radical “wild horse advocacy group,” WHE was founded and is run by Laura Leigh, who aggressively engages anyone disagreeing with her.

Seemingly, Leigh would rather leave the wild horses alone and remove ranchers from permitted public land.

“Everything that is alive at some point is going to die, but do we want to starve things to death? I don’t. I’d rather see things managed properly,” said rancher Mike Stremler.

Rancher Kevin Borba has cut his cattle herd from 500 to 100. The Nevada horse overpopulation is so bad that he will most likely have to sell all of his cattle.

Borba is being punished for speaking out against this government policy. Rightist groups are targeting him for fighting back when his land was taken away.

To push her belief of no interaction, Leigh has started a propaganda campaign to “educate the public on how well off” wild horses are.

Statistics show that only a specific number of feral horses can live on certain amounts of land.

Lack of food and water, destruction of ecosystems, and few predators make it harder for numbers to remain sustainable.

Often, there are two, three, or up to 10 times as many horses as the land can sustain.

BLM spends 70 percent of its annual budget on holding costs and adoptions, while just 2 percent for roundups.

Ranges are overflowing with feral horses and refuges are full, despite the $45,000 lifetime taxpayer cost of each horse in a sanctuary.

According to statistics, in 2007, the last year of operational U.S. horse processing facilities, 47,000 horses were sent overseas for processing; up to 130,000 in two years.

Since the ban, there has been a 660 percent increase in horses exported for Mexico slaughter. About 1.4 million pounds of horse meat were imported back into the U.S.

Many contend U.S processing centers should be reopened.  In this instance, a humane end for many horses would be provided with reduced chance of harm during transportation.

It would be cost effective for taxpayers, open up a multimillion dollar industry, providing jobs for American citizens.

“However unsavory the thought of horse processing, it’s the only viable option to ensure survival of wild horses, ecosystems, and other animals that are affected,” Lucas evaluated.