Some mares get their hay bales for raising foals.

Most mares are used for riding first and become mommas later in life.

That eight-year-old black mare owned by Dean and Tossie Kirkham of Valley Falls has had several foals.

The shapely stock horse naturally assumed producing babies her destination in life, despite owners not permitting love relations with a stallion the previous two springs.

Life took an abrupt change when “Blacky” was run into the stock trailer, hauled to Topeka and unloaded at the Expocentre last Tuesday morning.

Not always the sweetest thing yet manageable for what was thought life’s purpose, Blacky became a riding horse in just 15 minutes.

Scott Daily coaxed his rope halter with 22-foot shank on the broodmare and soon had her riding almost like a veteran.

It was the Arkansas City horse trainer’s first in a series of seminars at this year’s Topeka Farm Show.

A repeat clinician at the event, Daily had portable panels in round pen formation with bleachers about half filled with spectators on north and west sides.

Steadfast in her tracks, Blacky initially resisted Daily’s efforts to move her around the pen.

“She’s skittish, trying to prove her bossiness like the past. She’ll change, come around to my way of thinking,” insisted the trainer, as the ole mare turned her head, picked up a foot, took a step.

Within a minute, Blacky was moving freely to the left when Daily pressured her to stop and go the opposite direction.

Again, Blacky was asked to move around the pen, walk, trot, canter, then reversed direction three gaits, expressing ornery foxiness at certain points. “It’s important to go both ways, do everything from each side,” Daily insisted.

Upon stopping, the mare came to the trainer, who touched her gently with his hands on the neck, side and jowl of her head. “Look how her confidence is building,” Daily included his audience in the session.

Rope was dropped around Blacky’s feet, front and rear, behind her hips from both sides. The lariat then tightened slightly around her heart girth, left and right, initiating agitation revealed by a couple kicks, stomps.  “It’s okay,” trainer assured.

The mare was turned both ways several times from the ground, first showing resistance, then cooperating the handler’s request. “Very nice,” he complimented.

Just minutes into the training, one would have almost thought it was a different Blacky than started with.

“She has to know what weight is on her back before she’ll let me ride,” declared Daily as he put his body over her from both sides. Blacky again aired that broodmare instinct.

Saddle pad was brought down from the fence and rubbed all over the mare both sides before positioned squarely on her back. “Good job,” Daily appreciated.

Ears rudely perked when Daily lifted the saddle toward Blacky. Yet, the mare’s inquisitiveness turned calm as the trainer put the girths and stirrups over the saddle’s seat and moved it around both sides.

Setting his saddle gently on the mare’s back, Daily quickly brought the girth around her heart, snugging just slightly. “It’s important to make sure the saddle doesn’t come off if she decides to take off,” he warned.

Again moving from side to side of the horse, Daily further tightened the girth.  Tying the long shank to Blacky’s halter in roping-rein-form, excess in his belt loop, the trainer placed his left foot in the saddle stirrup putting some weight on the mare’s back from both sides. “Very good,” Daily acknowledged.

He then stepped up onto Blacky, and immediately got off, before remounting and positioning himself tightly in the saddle.

Expressing caution in her eye, the mare started edging forward with Daily’s knee-leg squeezing. “She’s still afraid, but really trying to get along,” Daily critiqued.

“Look how she’s freed up, moving out,” commented Daily, before stopping the mare and requesting movement the other direction.

While neck arched and nose jerked into the air a couple of times, Blacky was soon trotting and cantering without alarm. Stopping when rider asked, the mare even took a couple of requested steps backwards.

Even when Daily uncoiled his lariat and swung it around her head, Blacky only pricked ears momentarily.

“She’s a long ways from finished, but really a nice horse that should make a great one with enough riding,” the trainer concluded. 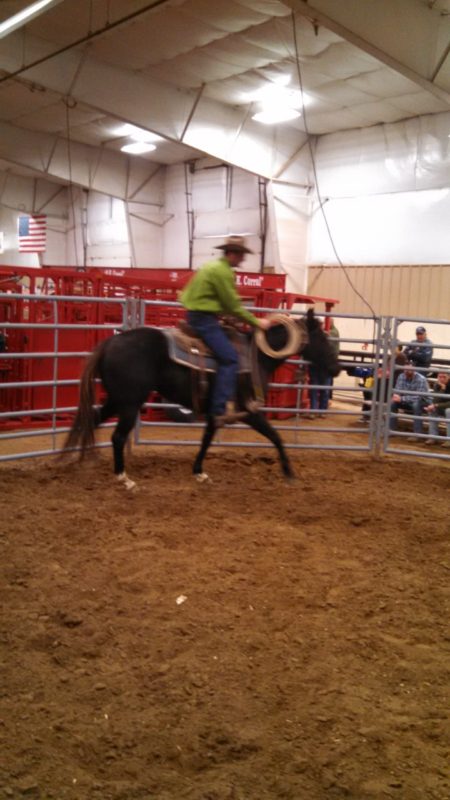 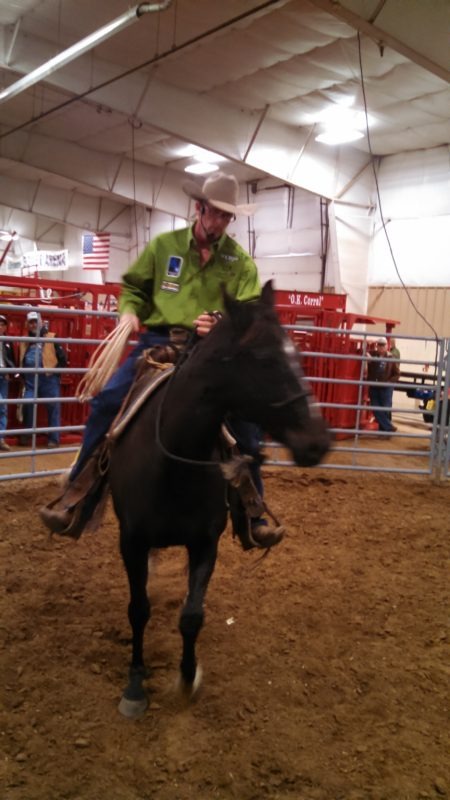 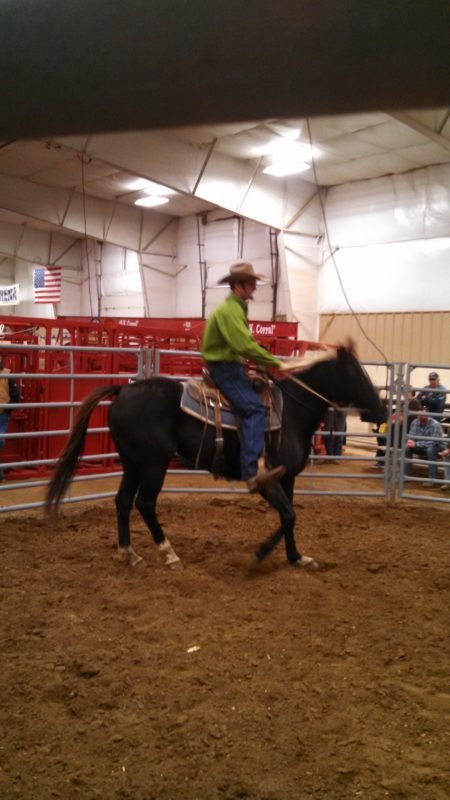