Western entertainment at its very best is set for Junction City Thursday and Friday evenings. 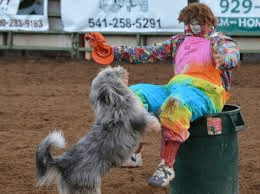 However, rodeo is what the action is really all about, clarified Blocker. “Recognized as one of the ‘largest open rodeos in Kansas,’ contestants from throughout the Midwest come to compete in the performances at 7:30 each evening.

“Friday evening’s performance is planned as the Tough Enough To Wear Pink Night for cancer awareness and benefit,” Blocker said.

There’ll be a Special Needs Rodeo, Saturday, from 10 o’clock, until noon.

“However, highlight of both evenings’ rodeo performances will be The  Copper  Town Clown’s special entertainment,” Blocker stated.

Bert Davis, often dubbed the “Clown with all the Dogs,” reached the third round in the TV show: America’s Got Talent. They were the only animal act to make it to Las Vegas in 2010.

Known as the “Muttley Crew,” this act features ten rescue dogs, adopted by Davis and his wife, Frannie, all of whom are superbly trained tricksters.

Davis has been working in the rodeo business since 1974, beginning his career at age 16, as the youngest bullfighter in the nation. He has been selected three times to perform as the featured act at the National Finals Rodeo in Las Vegas Nevada.

“While Davis is a courageous and hilarious performer, it is his dogs that truly endear him to the spectators,” Blocker said.

“Those sidekicks with their high energy antics make The Copper Town Clown one of the best and most-traveled animal specialty acts in the industry,” Blocker stated.