All he ever wanted to be is a cowboy, and Brian Bausch has ultimately fulfilled his boyhood dream.

Renowned throughout the country and around the world, the champion cowboy is coming home. 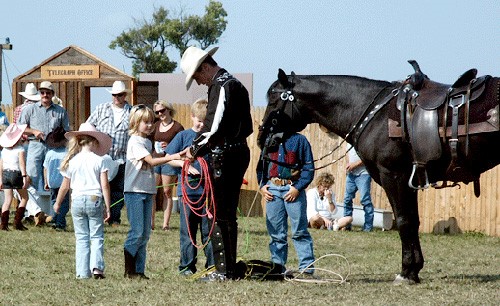 Growing up near Mayetta where his parents Richard and Helen Bausch continue ranching,  Brian will be in Jackson County this weekend.

“Brian and his beautiful black horse Rustler are best recognized from their live on-stage performance for America’s Got Talent in 2011,” she added.

Answering a call to his Queen Creek, Arizona, ranch, Brian Bausch verified, “I’ve been a lot of miles since I got my first horse when I was seven-years-old.”

Of the vast experiences, Brian reflecting his start in life as a real cowboy still brings most obvious strong affections. “I always wanted a horse. A newspaper ad for a horse with saddle for $200 seemed like a good deal to my folks so I’d quit begging,” he remembered.

“But, the yearling grade grulla gelding wasn’t broke,” Brian continued. “I was fortunate to have Gordon Kern, a top horseman, help me. Hobby became a great horse for me 25 years.”

“The first thing Gordon told Dad was to make sure I didn’t run Hobby all of the time,” Brian noted. “I never paid any attention to that.”

However, so he wouldn’t get in trouble, Brian had to cool his horse down before getting home. “I’d stand up on Hobby so he’d quit prancing and walk quietly. That was the beginning of my trick riding,” Brian said.

Graduating from Kansas State University, Brian eagerly accepted position as head wrangler at a resort in Michigan. “With 100 horses, it was a great opportunity to develop my horsemanship and training abilities,” he assured.

Guests were entertained during evening programs Brian presented with the horses. “I did trick riding, roping, and shooting, even learned fast draw and gun spinning,” he said.

“I had the opportunity several years to train sheriff department officers in shooting from horseback,” Brian noted.

Participating in mounted shooting events, Brian met his wife Paula at a competition in Wisconsin. “She is a barrel racer, and together now we’ve earned 22 world and national mounted shooting titles,” Brian commented.

“Rustler was seven-years-old when I got him, never trained to ride, only used for breeding,” Brian said.

One wouldn’t ever guess that history as the now 22-year-old foundation bred Leo-Skipper W stallion performs impeccably upon cowboy’s command.

“I’ve trained lots of horses, but no other horse is as smart as Rustler,” Brian said. “Rustler is so intelligent he becomes bored, and I have to keep him challenged with new things to do.”

That’s led to a variety of competitions and additional versatility titles.  “I do just about everything one could ever imagine with a horse,” said Brian, 43, rodeo and jackpot calf roping and team roping champion, too.

Horsemanship is a forever learning process, he contended. “I’ve worked with a number of the greatest horsemen expanding my knowledge about reining, working cow horses and other disciplines. The more a horse can do, the better he is,” Brian said.

Contracting their shows along the western seaboard, for special parties, including inspirational youth programs, the couple now only takes limited horses for training.

“We don’t train as many horses as at one time, but continue to conduct more horsemanship clinics,” said Brian, certified farrier with a typically-filled customer calendar.

Son Abram, eight, and daughter Hannah, six, are following boot steps of dad and mom. “They have a 25-inch black Mini Cowboy who they do tricks with and will be at Holton, too,” said Brian, adding that a second daughter is due in September.

Brian does crazy butterflies, push-offs, Oklahoma shuffles, and Texas skips to create a trick roping dance. With a 100-foot rope, he demonstrates rollovers, big loops, even jumping off Rustler’s back.

At five-foot-ten, 150-pounds, Brian is athletically built and fit for trick riding. He features bandit, leg drag, and pony express routines as well as up-the-neck, stands, flips, roman riding, and jumping through a fire hoop.