It’d be tough to find more cowboy country than the Flint Hills of Greenwood County, Kansas, so “rodeo time” is a most significant community affair.

“That’s the sixth annual Eureka Pro Rodeo, Friday and Saturday evenings, with a full slate of accompanying activities planned,” according to Robin Wunderlich, editor of the Eureka Herald.

“They head to Madison for a special presentation at the elementary school, before returning to Marshall Elementary School in Eureka at 2:30,” the editor explained.

“The Eureka Pro Rodeo Association has again coordinated the action,” Wunderlich pointed out.

“Members have donated a great deal of time and effort while serving on the committee working to bring the best heart-stopping rodeo action to the community,” Wunderlich credited.

Action gets underway at 6:30, Friday evening, when gates to the Eureka Saddle Club Arena open, proclaimed Jamie Nelson, one of those hardworking rodeo committeemen. There’ll be a Mutton Bustin’ for youngsters six and under at 7 o’clock.

Friday’s performance is dedicated “Military Appreciation Night” honoring those who’ve served and are serving, with flags representing all divisions to be flown.

“Lineup is 1:30 in the park, with all businesses, ranchers and sponsors encouraged to participate,” welcomed Nelson, who can be contacted at 620-582-9565.

VFW Post 2712 and Shrine units will lead the procession recognizing the late Mike Burke as grand marshal, who’ll also be honored prior to the evening rodeo performance.

“Saturday’s rodeo performance at 8 o’clock is dedicated as Shrine Night and Tough Enough To Wear Pink,” Nelson said. “Shriner’s Hospitals for Children and the June Bug Foundation will be recognized.”

Rodeo climax dance is at the Half Dollar, with the band Low Water, featuring Eureka’s own Tate McCoy.

Eureka is part of the Eastern Kansas Pro Rodeo Series, which includes Mound City and Coffeyville.

“So, we’re expecting contestants wanting to garner series award points, and also spectators eligible for an engraved knife drawing by attending all series rodeos,” Nelson noted. “The drawing will be here Saturday night, with proof of attendance being a ticket stub or program from all rodeos.”

A Morrowville, Kansas, native, Grover said, “I’m more comfortable behind the microphone in a full coliseum than I am in a one-on-one situation. You get the excitement of the crowd.

“I like taking people to almost screaming their heads off, to almost tears, to right back to screaming again. I think it’s the thrill of control, in a way,” the announcer added.

A former agriculture education instructor, Grover stepped out of the classroom and into a full-time rodeo announcing career. 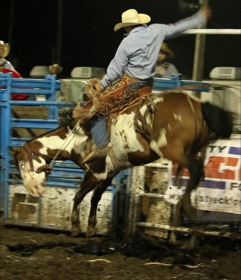 “Gizmo McCracken started his career as a bullfighter and moved into stand-up comedy at a show in Branson, Missouri,” Nelson said. Gadgets and gizmos that went sour were often part of his routine, hence the name “Gizmo, The World’s Greatest Inventor.”

“I like to keep people looking for me and wondering what I am going to do next,” Gizmo said.

“The acts share a high energy, clean, family oriented feel which adds a fresh new atmosphere to any rodeo he is a part of,” Nelson assured.

“The late Mike Burke, Severy, born and raised in Greenwood County, was an avid supporter of rodeo and ranching,” Nelson said.

Mike Burke passed away March 16 this year, at the age of 92, while his family continues the ranching operations. 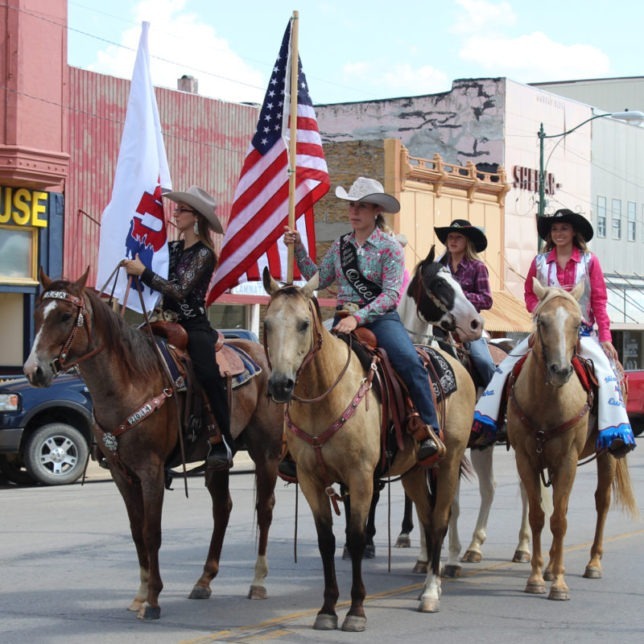