“He grew wanting to be bull rider.”

Just a teenager, this cowboy is already a winner, with indications to become one of the best. 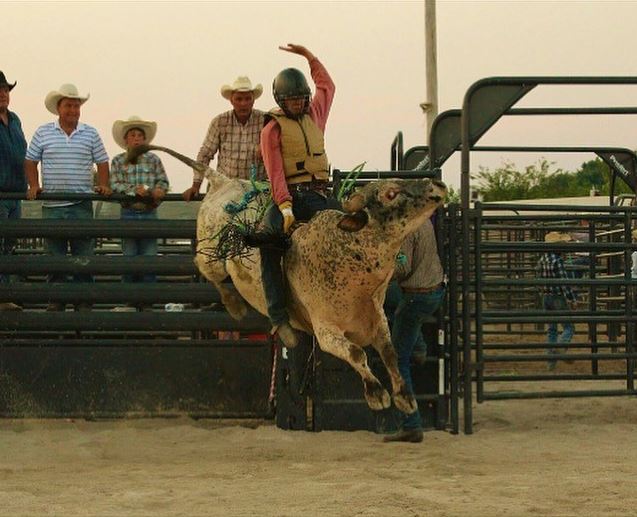 “My family raises bucking bulls, I’ve been around rodeo all my life. I just knew I wanted to ride bulls for a living.”

That’s Coy Pollmeier, 17, Fort Scott, just a high school junior this fall. “Riding bulls is about all I know really,” he insisted.

Oh, the determined Western athlete isn’t a full-fledged professional yet. “I just got off work and have to get my rope and equipment loaded. I’m up at Topeka tonight. I’ll call you when I get on the road,” Pollmeier responded.

Pollmeier started riding Holstein calves at age eight. “I graduated up to steers, then junior bulls,” he counted. “I’ve been riding big bulls since I started high school.”

Not just “riding” bucking bovine more than half of his life, Pollmeier has been winning major competitions.

“I’ve been lucky there’s a winter junior bull riding series here at Fort Scott,” he noted. “It’s nice to be close to home, get more experience, and win.”

That adrenalin thrust the young cowboy forward to the Kansas Junior high Rodeo Association. “I was fortunate enough to qualify for the nationals, too,” Pollmeier said.

In just his second year in the high school ranks, Pollmeier qualified for the National High School Rodeo Finals. “I was fourth in Kansas as a sophomore and ended up 14th at Gillette,” he verified.

“I’ve been going to several rodeos in a couple of circuits and also entering jackpot bull ridings,” he said.

“I’ll be up at two or three events a week sometime three or four,” Pollmeier added.

“I’ve really been happy with this year,” he contended. “I’ve been qualifying on 70-80 percent, about twice as many as last season.

“My highest score’s been 86 points, but I’ve marked a lot in the 80s. That’s what takes to win,” Pollmeier said.

It’s a physical and mind sport. “I have a stringent exercise program, jogging and a regular push-up routine. I feel like I’m in good shape,” explained the 6-foot, 150-pound athlete.

While he has played football previously, Pollmeier stated, “I concentrate entirely on bull riding now.”

Even the best bull riders suffer injuries, and Pollmeier had a knee injury requiring surgery. “That’s about it. Nothing too serious,” he shrugged.

Surely that would make him cautious, about getting back on the tough buckers. “I used to be a little scared of the rank bulls, but it doesn’t bother me anymore. They have to buck hard to collect a check,” Pollmeier evaluated.

Bucking bulls are all in the family. His parents Mark and Jamie Pollmeier’s P Arrow P Bucking Bulls breeding program includes features 20 cows with bucking bull lineage. “Our bulls are bucking all over the place,” Pollmeier said. “A few are even in the Professional Bull Riders events.”

His 13-year-old brother Tate follows in the rodeo tradition winning junior bull riding events. “We like everything about rodeo, and we team rope some too,” Pollmeier commented.

Going down the road costs, so the teenager usually has a couple of traveling partners to keep expenses down. “Sometimes I go with my family to certain events,” he added.

What about the future? “I would like to win the high school finals, and a couple of these Midwest circuits,” Pollmeier said.

Ranked in the United Rodeo Association (URA) and Missouri Rodeo Cowboys Association (MRCA) bull riding standings, Pollmeier said, “I’m second in the URA now, about $100 behind. I’d sure like to win that.”

He’s the youngest rider in the standings now. “I’m pretty proud of that,” the teenager smiled.

Plans are to get a Professional Rodeo Cowboys Association permit next year. “I want to make the circuit finals, and long term definitely intends to compete at the National Finals Rodeo in Las Vegas,” Pollmeier insisted.

It was a most successful past weekend as Pollmeier won second at both the Topeka URA rodeo and Mount Hope bull riding, as well as winning the average at the high school rodeo in Concordia Ks.

No letdown in weeks ahead. He’ll be on the amateur circuit, high school rodeos and jackpots that fit in the tight schedule.