“No hoof no horse, it’s that simple, yet that so very complicated.”

Lots of people can shoe horses, but top farriers in reality remain far and few between. 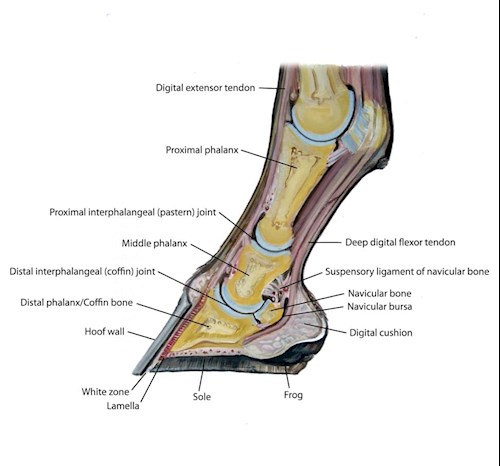 Dr. Stephen O’Grady has devoted his professional life to horse foot study, both as a veterinarian and farrier.

“For more than 2,000 years, humanity has recognized the importance of healthy and proportional feet if the horse was to be maintained as a useful beast of burden,”  O’Grady said. “The ancient Greek horseman Xenophon said, ‘If he has not good feet, there is no profit in him as a war horse.’ ”

As with everything related to horse anatomy, the hoof’s form, “the structure of its parts and the way they are arranged,” greatly affects its function.

“The hoof wall is an ‘elastomeric’ structure,” O’Grady said. “Its design allows weight-bearing functions, as well as shock dissipation.”

When functioning correctly, the hoof provides protection and support for the horse’s bones and ligaments that make up the lower limb.

“The horse’s foot is unique as it is a biological entity that follows the laws of physics,” O’Grady explained. “When one changes the hoof when shoeing, it changes structures within the hoof.”

The horse’s digit is its farthest extremity in the lower limb, from the fetlock down to the ground. Tendons and ligaments act as support structures for the bones, as there are no muscles in the digit.

Coffin bone has three surfaces: the articular at the joint, the parietal and the solar bottom.

“The parietal surface forms a large surface area that is porous and roughened, ideally adapted for attachment of the lamina,” he explained.

The digital cushion is composed of fibrous microscopic rods, elastic fibers and fat cells, O’Grady said. “It shapes the rear of the foot, therefore dictating poor or good hoof conformation, and plays a major role in absorbing concussion.”

When a horse has low heels or underrun heels, part of the problem is that the structure of the hoof wall has been altered so that weight bearing has been shifted to the digital cushion.

“The hoof capsule is a protective shell, and its internal dynamic factors rarely change but they are susceptible to damage,” O’Grady said. “The hoof is the skin of the foot and can be divided into five distinct regions coronary band, hoof wall, sole, frog and heel bulbs.”

Coronary band is specialized to produce the hoof wall and adjacent dermal structures.

The stratum medium is made up of vertical tubules of varying density, with the highest density toward the external part of the wall.

“At the heels, the hoof wall is inflected forward and inward at an acute angle to form the bars,” O’Grady said, “The bars are weight-bearing structures for the rear aspect of the hoof.”

External influences on the hoof’s form and function include the horse’s use and above all shoeing.

Hoof capsule has the ability to deform under load and then return to its original shape when weight is removed.

Sole is the bottom or ground surface of the foot. “It should be concave,” O’Grady said. “Its purpose is protection, and it plays a role in concussion and weight distribution.”

Frog is made up of elastic horn and aids in the foot’s expansion. The frog and digital cushion above it work together to allow expansion at the heels.

Hoof is also a ‘hemodynamic’ system. Veins of the hoof collect into a complex of interconnecting blood vessels. These are designed to reduce concussive forces on the bone.

“We don’t really know what a normal foot is,” O’Grady said, “because that qualification is individual to each horse.”

Instead, O’Grady looks for a “good” or “functional” foot, from the side, front, rear and bottom.

“This triangular relationship can be used to evaluate a balanced, functional foot regardless of the size of the horse,” O’Grady said.

Viewed from the front, a vertical line that bisects the cannon bone and the digit should separate the foot into two equal parts.

“Viewed from the bottom, the properly trimmed foot should be as wide as it is long,” O’Grady concluded.