“His life was one of heartfelt conscientiousness to always be a better steward of farm land.”

Most accurately, concisely Don Schurman must be and will always be remembered that simply yet complex, unselfish, concerned dedication.

Only his strongest never doubting or unceasing faith coupled with love and adoration for family surpass his crop soil caretaking.

Passing mourned by all who knew and harvested from Don’s services foremost his adoring wife of 53 years Shirley. Their three children, five grandchildren and a great-granddaughter grieve the loss.

Son of Lawrence and Nora Schumann, Don was baptized in commitment to Christ for life everlasting through the Catholic faith.

A lifelong farmer, Don started managing crop production operations as a teenager when his dad was injured doing farm work.

With Shirley, the couple farmed including custom services at Kelly, Circleville, Emmett and back to the family homestead at Seneca.

Serving as a director of the National Farmers Organization (NFO), Don was a leader in the late-1970’s American Agriculture Movement. Lobbying for improved agriculture in Washington, D.C., Don represented Nemaha County farmers driving his tractor in the nation’s capital.

Ever curious to understand and better steward farm land, Don and Shirley established Ag Connection Sales, Inc., in 1984. They worked very closely with growers throughout the Midwest to improve soil fertility.

Don attended many conferences and seminars learning about sustainable agriculture.

He did countless field trials, hosting grower field days and seminars to enhance production of quality crops while improving soils.

Don’s health was challenged with a stroke in 2004, while determination for land improvement never ceased.

Especially meaningful to Don was his family’s assistance and unyielding continuation of his work, marketing Sure Crop Fertilizers. The farm service business is a 580 WIBW advertiser and farm program sponsor.

For a decade, Don and Shirley traveled in their motorhome, visiting growers, who became dear friends, across the United States.

His hobby was collecting both antique tractors and toy tractors.

Services were at St. Peter and Paul Catholic Church, Seneca, December 10. Don was laid to rest in St. Bede’s Cemetery at Kelly. Memorials can be made to the church. 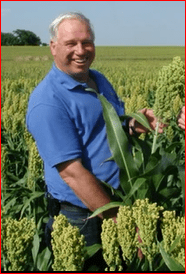