“We’ve spent considerable time finding a place out of the rain.”

Obviously that’s been an effort for many, let alone a pair of horseback trail riders Jerry Andrews and Penney Elpers.

Without any vehicle assistance, faithful in divine guidance the Cheyenne, Oklahoma, pair are riding the American Discovery Trail.

With three horses, two for riding and one  packing tent and personals, they’ve been on the trail since April 10th..

Thursday evening, May 9, was spent in Wilsey at the Gary Smith home then traveling to Council Grove Friday.

Camp was set up behind Don Peterson’s home at the edge of town. Their tent was placed under a small shed with horses grazing an outback lot. Peterson hosted the travelers to supper and breakfast in the historic community.

“Everybody has been so congenial and helpful all of the way. We really appreciate it,” Andrews, 48,  acknowledged.

While they do have cell phones including email, the ride has been mostly shirt tail faith. “Most of the ride to date has been to meet up with the American Discovery Trail. Yet, with God’s grace we’ve always found places to set up camp at night,” Andrews said.

That’s been at fairgrounds, rodeo arenas and local people such as Don Peterson offering homesteads for their overnight stay. “These phones have to be charged and we’ve been blessed to do that, too,” Andrews noted.

Both Rusty and Star have roping experience plus Star has been run in barrel racing. “I’ve done cattle work and pasture roping with them,” Andrews informed. “Speck is a good all-around horse.”

When it’s time to hit the trail (Penney) Elpers, 51, said, “We trade off on which horses we ride. We really don’t have a preference.”

Trail terrain is widely varied. “It not nearly all developed. We’ve tried to say off the gravel and pavement as much as possible,” Andrews verified.

Still, the horses have withstood the travel well. “They’ve stayed sound even though shoes have come off and it’s taken time to get them back on,” Andrews commented. “I’m not much of a farrier, but still able to get the job done.”

Intentions are to travel about 20 miles a day, but that’s determined mostly by mother nature. “During the pour downs we’ve tried to find shelter, and trail conditions affect our daily progress.

“We’ve ridden 30 miles some good days, yet only 10 miles other times. It’ll still average about 20 miles,” Andrews said. “We sure don’t want to push the horses too hard, get one lame, and slow us down more.”

When suppertime comes, horses and riders alike are ready for bedtime. “Horses come first. We like to find grassland so they can graze. Or hay sometimes, but they really don’t get much grain,” Andrews said.

The portable tent is convenient and works well for the riders’ night rest. It’s appreciated when camp can be beneath a structure such as at Peterson’s place for added protection from elements.

Living on the trail requires nourishment for the riders, too, who “make do with what the good Lord provides,” it’s insisted.

The American Discovery Trail is a new breed of national trail, according to the traveling pair. “It reaches across America, linking community to community in the first coast to coast, non-motorized trail,” Andrews said. 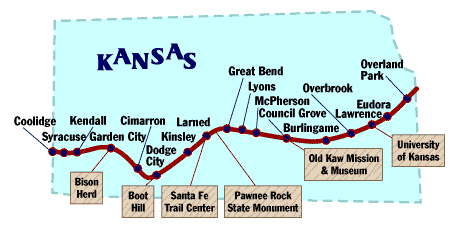 “We had done some three or four day trail rides, and rode to San Angelo, Texas, and back last year. That was a longer ride, 21 days on the trail,” Andrews said.

“We decided to try a trail ride across the country, with nowhere in mind,” Andrews said. “Actually, we prayed to God, and He showed us what was ahead.”

Always a historian of sorts, Andrews found appeal when he heard about the American Discovery Trail. “I’ve studied my heritage thinking this ride might have some more answers besides being a great experience,” he commented.

Although on the trail more than four weeks, the congenial horseback pair’s destination ride is just beginning. “We’ve seen some beautiful country, and met so many nice people,” Andrews said.

A native of Friendship in Jackson County, Oklahoma, southeast of Cheyenne, Andrews grew up in an agriculture environment.

“We did some farming, helped with irrigation systems, worked in the oilfields. I’ve done a little bit of everything,” Andrews said. “A man has to work; whatever it takes to make a living.”

Theirs is a backward ride or sorts, the American Discovery Trail from west to east for them. A trail map also shows, of course, Council Grove as well as Burlingame, Overbrook, Eudora and Overland Park on their eastern ride.

“We’re fortunate the Flint Hills and the Santa Fe Trail are on our route,” Andrews said. “Seeing and learning more about them here at Council Grove has been another great experience.”

“Arrival time is uncalculated,” admitted Andrews, adding that intentions are to get there about mid-August.

“There are lots of unpredictable days of travel ahead and every one will be an unforgettable memory,” Andrews evaluated.

It’s far different from settlers moving West a century-and-a-half ago. Yet civilization will surely create situations unimaginable by forefathers possibly even more stressful, might that be possible.

A ledger of the most-modern day trail ride is being recorded in form on Facebook by Andrews as Horseback Disciple.

“When we get to Connecticut, plans are to have the horses trucked back to Oklahoma and we’ll travel with them. There’ll be a lot happen between now and then,” Andrews assured. 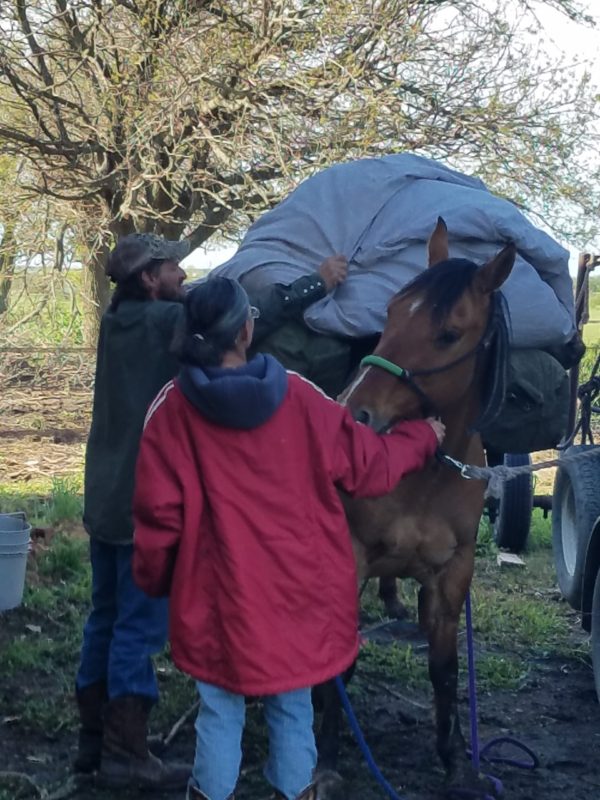