“Oh we try to rope ten to a dozen head every night if the weather’s favorable.

“The more you rope the better you get. I always enjoy roping and want to do it to the best of my ability.” 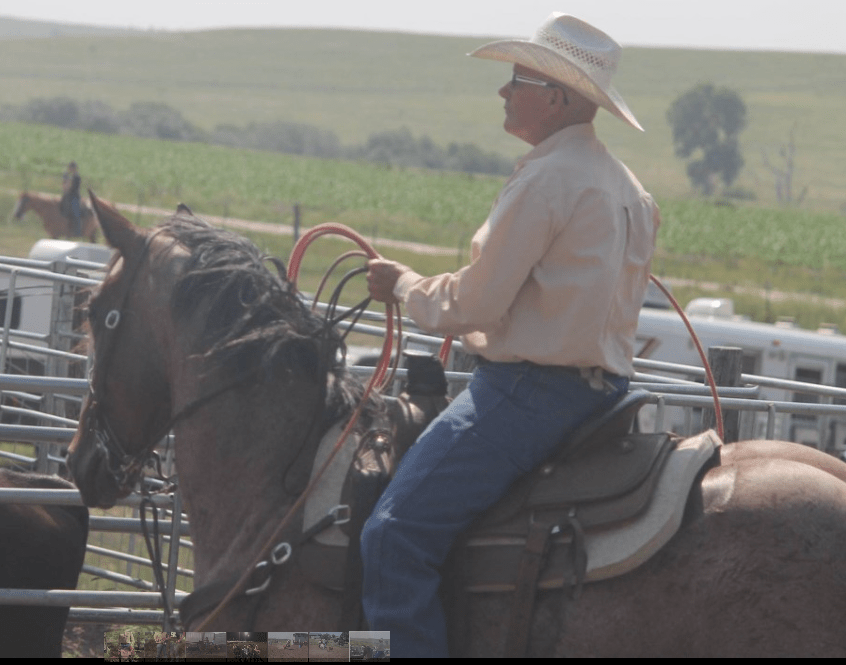 Guy Winters lives the life he loves. He’s a cowboy.

Yes, a winner in the roping pen from dedicated practice yet perhaps more so being on horseback as fulltime profession.

“All I ever wanted to do was ride and rope. I’m fortunate I can do what I like to do and have all my life,” Winters said.

Growing up on the farm where he lives now at Abilene, the cowboy said, “I’m the third generation here. We always had an arena so I could practice then too.

“I started out going to shodeos where they also had calf roping and breakaway roping in those days. I basically did all of the events, rode in everything, but of course liked roping the best,” Winters admitted.

After high school, the cowboy went right to the profession he’d been forever destined. “I worked for Lawrence Clemence in his cattle operations 10 years or so, it was good. Then I came to Arden Peterson’s here. I’ve never had to drive more than two miles to my day job,” Winters said.

This is 35 years he’s worked for Peterson’s Solomon-based operations caring for feedlot and grazing cattle. “Arden is a super man to work for,” Winters acknowledged.

Fortunately his job is Winters’ sport as well. “There are cattle to look after in the lots and in pastures, and we rope what needs doctored. So, I get roping practice in my job and then have my relaxation practice roping in the evening, too. It all helps get prepared for a team roping competition,” he verified.

Wherever Winters pulls into an arena parking area, the competition knows they’d better catch because he most likely won’t miss. “I sure don’t like to, but there as so many variables it can happen,” the roper conceded.

Uncertain how many steers he’s headed straight without missing, Winters shrugged, “I did miss two at Junction City. I’m uncertain why, but I don’t ever blame my horse.”

Over the Labor Day weekend, he headed 16 straight at Osborne collecting a third place check. A day later, the 65-year-old champion claimed first place money out of more than 100 teams at a local jackpot.

Shy about discussing his arena successes, Winters has won more buckles, saddles and payback checks than he’ll reveal. “I don’t keep track just so I have enough to pay the next entry fees,” he said. “If I win a saddle, I usually try to sell it back to them. I’m particular about the saddle I ride and the ropes I use, too.”

But it’s sure not all wins. “You can get high sometimes, but then pretty down when there’s a couple bad runs. I try harder the next time,” Winters said.

Winning at major United States Team Roping Championship events with big purses, Winters enjoys wherever he’s roping. “Some people don’t understand it, but I’d just as soon go to a $500 roping as one that pays $5,000. I try to win and sure appreciate the comradery at every team roping. I really do like the area jackpots,” Winters said.

Team roping is a partner event; head and heel. “I used to consider myself a heeler, but I generally head nowadays. Although probably more money in the long run heeling, but I can rope either end need be,” the cowboy stated.

In jackpots, partners are typically decided by ropers or by luck of the draw. In the practice pen, Winters has some of the best partners. “My son was a top roper, an outstanding heeler,” Dad noted. “We roped together successfully, but he sort of outgrew me going to the pro rodeos and bigger team roping events.”

Sadly, Guy Winters Jr, just 29, passed away from a tragic accident in 2009. “He was an all-around cowboy; roped calves, even rode bulls and steer wrestled some,” the senior Winters said.

Practice partner these days is Winters’ grandson 15-year-old Colin Ryan. “It’s just great. We have a fun time,” Grandpa said. “I’ve tried to help him along, and Colin has sure won some jackpot money, too. He was fourth at Osborne, first at Canton, getting better and better.”

In addition to regular cowboy employment, Winters looks after other cows and grass cattle personally. “Colin is good help on horseback in everything we do,” Grandpa added.

Horses are the essential ingredient to being a cowboy in the pasture, arena and for winning runs. “I train all of my horses. I’ve never sent a horse to anybody for riding,” Winters said. “If there’s a problem I try to fix it.”

Preferring cow bred horses with some run in their pedigree, Winters said, “I need to get to the cattle. My horses are registered, but that paper doesn’t make the horse.”

Generally trying to acquire about a three-year-old, that’s had some riding, Winters has success with younger and older horses, too. “I like to find a horse that hasn’t picked up any bad habits.

“I ride a horse doing everything there is on horseback, work in the pasture, roping and doctoring outside,” he explained. “I don’t like to take ’em in the roping pen until they’re about five. They’ll usually get pretty solid at about seven.

“I do prefer geldings, mainly because they get along better when turned out together. But I’ve had some good mares,” Winters added.

Ann, his wife, helps in getting horses seasoned. “She likes to ride and goes to most of the roping’s with me getting horses used to surroundings.” Winters credited.

“Guy’s mom said it, and it’s true: the Winters men have a love for animals. They’re kind hearted with a great love for cattle and top horses.” Ann pointed out. “Guy is a true cowboy a good man. When Guy shakes your hand and gives you his word it is good as any contract.  He rides for the brand you might say.

“When we are working cattle on horseback or on foot Guy always amazes me. He can read what the cattle are going to do before they do it,” Ann smiled. “I am just a little proud of both Guy and Colin.  A few weeks ago they won the jackpot at Canton together, and Colin won the buckle.”

Specialization has increased among horse owners, but Winters still prefers a horse that can do anything and everything. “My horses can rope the head or heel and also work a cow,” he commented. “I have four horses now that I can take to any roping and get along fine.”

Most regulars at team roping jackpots recognize Winters’ horse Superman. “He’s a great one, but is 25 now, so I’m retiring him. Those good old horses are what the kids need though to learn on,” Winters said. “Then they can take a young horse, know what to expect, what to do and get along.”

An 11-year-old roan called Conway is often Winters’ main mount these days. “He’ll give me the same run every time, which is essential to get a check,” the roper said.

No slowdown in sight for this cowboy. “I love my job. I love to rope. Age is just a number. I have no desire to retire or change what I’m doing,” Winters analyzed. “The younger ropers might have a slight advantage in a one head roping. But I can usually hold my own when it’s a three or four head jackpot.

“I tell these younger guys to pick something you enjoy doing, and then adjust your lifestyle to what you’re doing. That makes life a lot simpler and more satisfying.

“I’ve always enjoyed being a cowboy, still do, and wouldn’t change it.”