“It was almost like turning pages of the True Old West back more than a century-and-a-half.”

John’s Shoe and Saddle Repair on the southeast corner of Wamego’s Main Street certainly gave many such a warming feeling.

Walking into the rattily 156-years-old original front door, whoever it was their eyes brightened in the dingy-lighted dusty business foyer

Well-used cowboy saddles lined both sides of the room as bridles, halters and every imaginable piece of tack hung nearby.

Then, “What can I do for you,” was the greeting from the back working area of the shop. John Lyon welcomed cowboys, of course, and many others from a wide area anxious to service their leather needs.

Now, each and every one who knew the cowboy-at-heart, talented-leather-worker, highly intelligent diversely-capable gentleman miss him so much.

Lyon, congenially acknowledged as John, or Johnny to perhaps even more, has gone to the Great Beyond. John Albert Lyon succumbed April 4, 2021, to world-dreaded coronavirus in a Topeka hospital.

Stories are completely unending from those who knew Johnny. Usually he was first recognized for his quality leather work then more so for being such a nice guy.

“I think of myself in the oral tradition, as a troubadour, a village tale-teller, the man in the shadows of the campfire. That’s the way I’d like to be remembered, as a storyteller, a good storyteller.” Renowned Western novelist Louis L’Amour first said it.

Johnny Lyon brought cowboy storytelling to real life. In what became a most familiar kindly drawl, Johnny always had true cowboy stories to tell. They weren’t made up tales like the famous author, but revealed the cowboy life Johnny continued to live.

Yet, those true cowboy stories had a certain artistic background with the undeniably realistic presentation.

Seldom if ever was there not leather work to be done. But when such time came or not, Johnny would sometimes be cocked back in his easy chair reading. He might relate some Western novel excerpts,  comment what book was next, or more likely share his cowboy life’s stories.

“When going in to get work done, you’d better plan on spending an hour  even if it was a 15-minutes job.” That’s an often repeated comment from nearly every one of Johnny’s most dedicated customer friends.

Work and talk went together keeping the customer intrigued with both, such that visitors frequently just stopped in to listen. They may have heard the story before but it was always fun to hear again in often apparent exaggerated variations.

Now don’t be misled. Johnny Lyon was not-even-arguably “the best” at his trade. There is no shortage of wannabes in working with leather, but quality of product is widely different.  “If Johnny fixed shoes or boots, built a saddle, made tack, or repaired horse equipment, it was done to last.” Again a frequent appreciative remark said about the artisan.

Never criticizing, yet recognizing, an added comment was often made. “Leather might not match, the job may not be the prettiest, but it would work for a long time.”

With his brother-in-law Mike Vernese, Johnny owned, trained and merchandized a number of quality horses. Many were of strong racing lineage and high value prompting sales throughout the country.

One of which Johnny was proudest frequently showing its picture decades later was Shelljet, featuring a Jet Deck pedigree. Additional elite speed offspring including that of renowned Go Man Go were among his horse entrepreneurships.

Proudest day was birth of his namesake son destined to of course be a cowboy and all-around talented industrialist.

Often confusing, Johnny named his boy, John, also called Johnny at school, and nowadays Matt, or Matthew, his middle name. “There were four of us named John Lyon, before Dad passed, so some call me Matt, preventing mix-up,” son explained.

In the saddle at an early age, Matt followed Johnny’s abilities becoming a proficient roper collecting arena titles. “I wasn’t much into leather but still like Dad, a cowboy, machinist, welder, truck driver,” Matt said.

Literature interests flowed through genes too. “We wrote a self-published book about my great-great-grandfather Pressler’s service during the Civil War,” younger Lyon added.

A 12-acre tract purchased northeast of Wamego became The Lyon Family Farm providing relaxing cowboy pastime for Johnny and Matt. Together they built a high quality steel fenced roping arena and nearby three-stall horse barn. A park area was established to host crowds of friends for Johnny’s birthday, Fourth of July and a soup supper.

Cattle were acquired with regular practice sessions and occasional jackpot events. “We bought, tuned, traded and sold a lot of horses, more than a hundred through the years,” Matt counted.

The Lyon Family Farm was most appropriate for remembrance of John Albert Lyon 1949-2021. Bright warm sunshiny afternoon, American flags were flying in the breeze. More than a hundred cowboys, customers, motorcyclists, friends of every caliber gathered.

Marty Robbin’s “Strawberry Roan” and George Strait’s “A Love Without End Amen” set the tone. Dan Biedenbender of the Cowboy Country Church officiated with reflections and Biblical appropriates. Remembrances of Johnny by several attendees brought agreeable nods from everybody there. 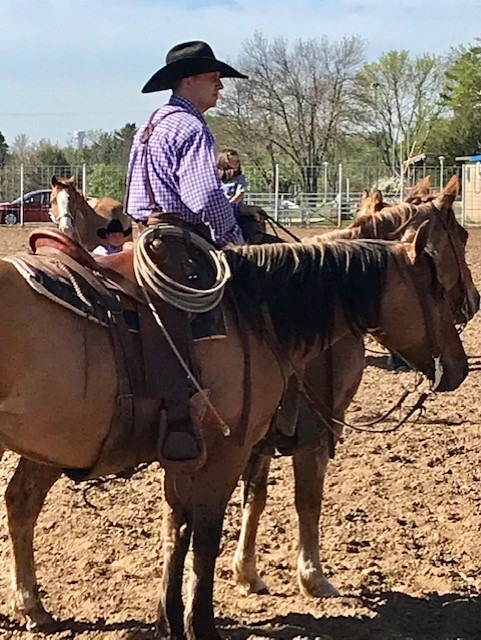 Johnny Lyon’s generosity was acknowledged during the Running Raged Youth Rodeo Finals and a BlackJack Saddle Club Show. Vince Mowry lead a symbolic riderless horse tacked with equipment Johnny had made and the fallen cowboy’s own boots. Johnny’s donations of leatherwork given for yearend awards were recognized with plaques.

A Johnny Lyon Benefit Memorial roping is planned Saturday, June 5, in the Onaga Arena, at 1o’clock, Entire proceeds from the jackpot competition presented by Rafter GB Productions will benefit the John Lyon Memorial. Additional information and sponsorships are available by calling 785-844-0941.

Remembrances of the “one-of-a-kind” cowboy saddle maker storyteller are welcomed at https://everloved.com/life-of/john-lyon/.