Chancy Johnson of White City fondly remembers her pony Pepper. “He was just perfect and positive experiences with Pepper are probably why I still enjoy horses so much,” she verified.

“Pepper was a good one even though he did buck me off a couple times,” Chancy admitted. “But that was okay, because it helped me learn to ride better.”

Since then, Chancy has had several horses and become an outstanding all-around cowgirl and leader among young people.

“I’ve been so fortunate that my parents and family have been such strong supporters of all I’ve done,” Chancy appreciated.

Eighteen-year-old daughter of ranchers Chad and Janon Johnson, Chancy has a younger brother Colter. “Dad and Mom have always seen that I had nice horses, provided coaching and hauled me to activities,” she added. “They’ve been so very helpful.”

While horses are high on priorities, Chancy has a very busy life beyond the ranch and arena. She recently graduated as valedictorian of her class at White City High School in White City.

“It’s been a crazy busy year, but oh what fun,” she declared.

Active in other athletics, Chancy has played high school basketball four years being a starter. “We had a good team this year, but it didn’t go as well as we had hoped,” she noted. “I also played volleyball this year for the first time, and it was sure exciting, too.”

Active in 4-H work, besides showing horses, Chancy has exhibited other projects and served as a club leader. “I’ve had several top steers and heifers, which means a lot to me and my ranch family,” she commented.

Serving leadership roles in community and school activities, Chancy was an FFA officer four years including the presidency. “It has been a great learning experience, especially participating in the contests. Livestock judging was quite educational and enjoyable,” she insisted.

Whenever there has been need, Chancy stepped up to help at many school, horse and rodeo activities.

First competition experience for the cowgirl was in the Eastern Kansas Horseman’s Association.

“I started riding our big bay ranch gelding called Tex in about every event,” Chancy said. “He was a great all-around horse. I’d ride Tex in shows and Dad also used him in the pasture and at ranch rodeos, a cool deal. Tex is now 29-years-old out in retirement.”

From horse shows, Chancy started competing in junior rodeo associations collecting a number of championships in several events. “I competed in about everything there was at one time or another,” she said. “I’ve had some top pole bending, barrel racing and roping horses, even tied goats for a while.”

Highlight of Chancy’s accomplishments to date she said was being reserve world champion Little Britches breakaway roping. “I’m pretty proud of that because there were more than a thousand contestants in the finals at Guthrie, Oklahoma,” Chancy remembered.

In the two-head, long go-round, the cowgirl was 7-seconds, and came back to rope her short-go calf in 5-seconds.

Competing in the Kansas High School Rodeo Association the past four years, Chancy has concentrated on barrel racing and breakaway.

To be a winner at that level requires lots of practice and Chancy has a dedicated work ethic. “When I’m out for school sports I still work my horses two or three times a week,” she said. “Now, I ride just about every day, giving them a day off occasionally. Not always in the arena, but often in the pasture to keep the horses legged up.”

That’s no small workload coupled with her new job at Building Blocks childcare in Council Grove.

Lay people have not an inking what a science it is to be a top roper. “I practice roping every day,” Chancy said. “I like to rope live calves, but when that’s not possible, I spend time practicing on the roping dummy.”

How long practice is and how many loops are thrown depend on how the session is going. “In order to be as sharp as possible, I want every loop to be perfect,” Chancy said. “What I like to see is a perfect figure eight with the rope going around the calf’s head.”

While she has done limited team roping, Chancy wants to stay more focused on breakaway. “Different loops are required for each event,” she said. “I may start doing more team roping, but I have to make sure I rope the best possible in breakaway.”

“I will major in agriculture business and accounting while competing in the National Intercollegiate Rodeo Association (NIRA),” she said. “I plan to live in the dorm and have two or three horses there at the college facilities.”

While she’s had hard luck with top horses in the past, Chancy is confident of her two present college mounts. “I’ll be riding Leo in barrel racing and roping off of my bay gelding Mack,” she said.

Looking toward qualifying for the NIRA Finals while attending NEO, Chancy will move from there to a four year school. “I’m uncertain if it’ll be K-State or Oklahoma State,” she said. “I may continue to college rodeo depending on how it goes at NEO. I sure want to concentrate on my studies the final two college years.”

Upon graduation, Chancy looks to a career in accounting and agriculture business management.

“I have a small cow-calf operation of my own and will always maintain my ties at our family ranch,” she assured. “Breakaway roping is becoming a major event in professional rodeo. So I see a strong future there along with whatever else I do.” 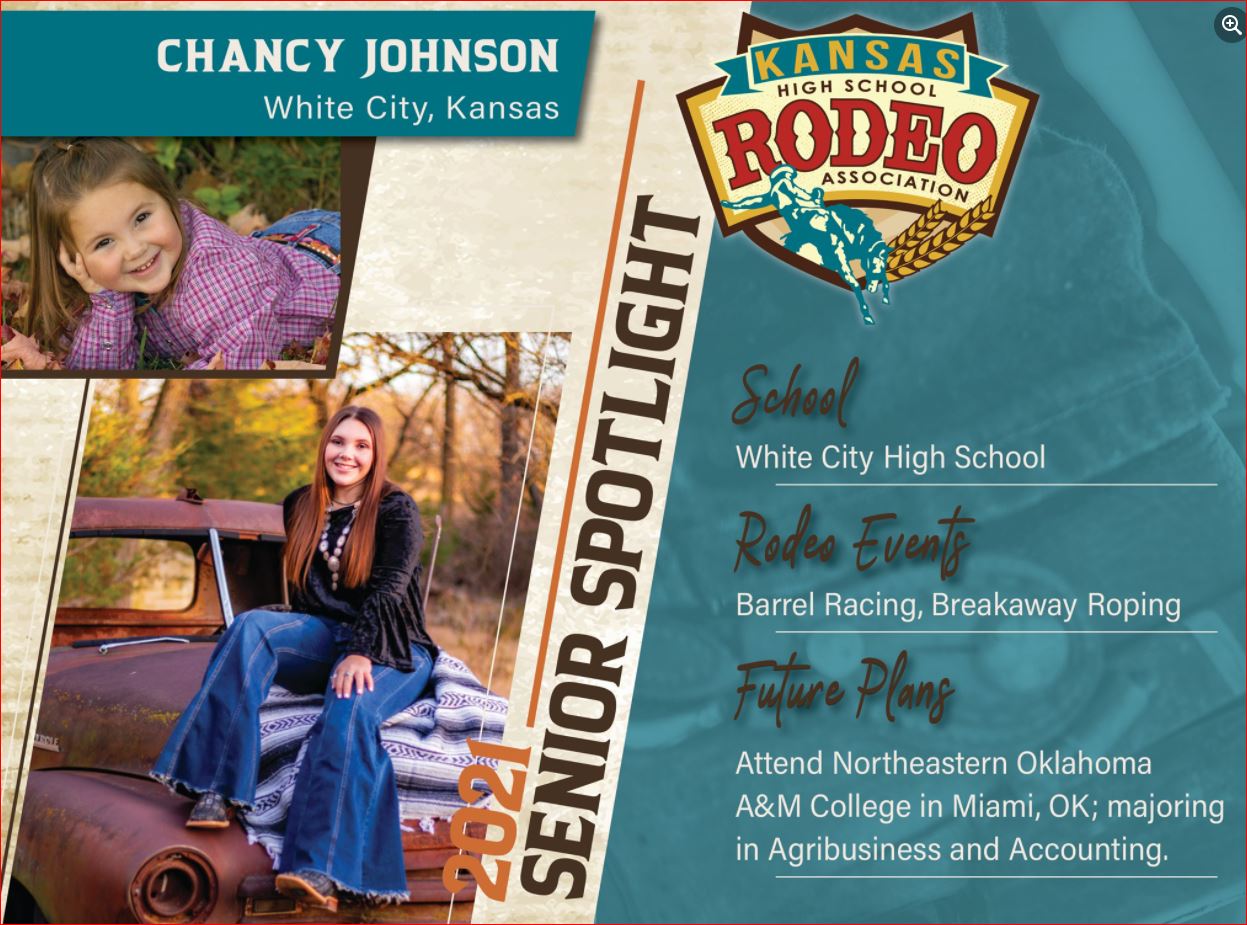