“Life has returned to the largest most elaborate rural rodeo grounds in one of the smallest towns in the Midwest.”

After hosting the top rodeo in the state for several years, the outstanding facilities set idle for almost two decades.

“It was a sad shame for such a great rodeo grounds being unused and so rapidly deteriorating,” exclaimed Deidre Moran.

In Barton County, close-by Great Bend, Odin has population less than 100 strong in volunteerism matched from a wide area.

“I helped park cars at the rodeo on my Pinto pony when I was just a little girl,” Deidre said. “The arena has always been important to me, so I was quite pleased they asked me to oversee the renovations.”

A community effort from get-go Bones Prosser is credited as brainchild for the rodeo grounds. “Bones just one day in the late 70’s decided Odin should have a rodeo and started working to make it a reality,” Deidre said. “Edgar Jacobs at the Odin Store gave his immediate support and people from miles around joined in.”

The 150-feet-by-250-feet arena is situated on 17 acres of Bones Prosser’s property. “Appropriately, the Odin Saddle Club named it the Prosser Arena,” Deidre noted.

“It was ahead of the times built above and beyond what’s expected in a small community like Odin,” Deidre declared. “Contestants and spectators alike came from many miles for the great rodeo action commenting about the elaborate facilities.”

The Kansas State Rodeo Association (KSRA) recognized Odin as the Rodeo of the Year four years straight from 1987 through 1990. 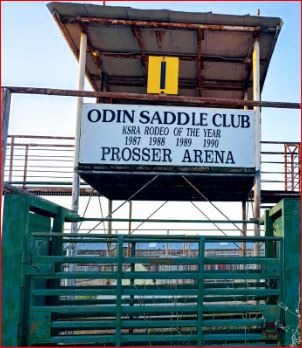 Despite renowned success, area interest and support dwindled with nothing at the arena after 1999. “I’m uncertain all of the reasoning,” Deidre admitted. “But the cost of upkeep, insurance, fewer volunteering to help and people weren’t going to rodeos as much.”

However, support semblance of olden days has resurged for refurbishing the Odin Rodeo Grounds still owned by Bones Prosser’s family.

“It’s really heartwarming how so many individuals and businesses have come forward to assist,” Deidre credited. “Bones’ son Abe Prosser and Edgar Jacobs at the Odin Store have been a big help. I won’t try to name everybody because I’d leave somebody out and I so appreciate all of the support.”

Businesses from throughout the county and beyond have donated materials, paint, labor and much more. “Just about whatever we’ve needed somebody somewhere has been anxious to offer assistance,” Deidre said. “One detriment has been the increased cost of lumber and steel due to the coronavirus. Yet generosity of so many has enabled us to move forward.”

“In addition to training horseshow champions, I have produced several horseshow circuits and bull manias throughout the years,” she said. “So I worked with Jason Bell of Bell Bucking Bulls at Hedville to have the Sidewinders Bulls & Barrel series.”

There were events in April, May and June; with a fourth competition set August 27. “The Sidewinders Bulls & Barrels Finals are at the Odin Rodeo Grounds on October 9,” Deidre said. “A beer garden and concessions will be at both of the upcoming Sidewinders events.”

Each evening competition begins with mutton busting for the kids at 6 o’clock. “We have the first go round of 20 bull riders at 7 o’clock,” Bell said. “Then the barrel races are run before the second round of bull riding.”

The Sidewinders series features Bell’s bulls bucking semblance of the rattlesnake thrusting forwards in a series of flat S-shaped curves. “I’ve been raising bucking bulls for 22 years,” Bell said. “I started out with one bucking bred cow from Jimmy Crowther and have built my own herd.” 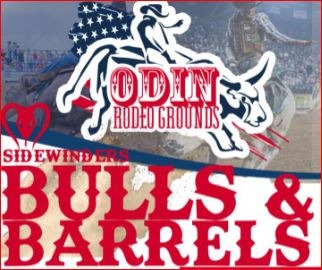 Sponsoring bull riding jackpots throughout the Midwest, Bell also enters his bulls in bucking bull futurities, derbies and classics.  “These competitions draw the best bucking bulls in the country, and my bulls have won several top awards,” Bell said.

With only 20 bull riders in each Sidewinders event, cowboys have fared very low compared to the bulls. “While several of the best bull riders in the world have entered the series, we’ve only had a few qualified rides,” Bell said. “Cowboys have come from five states and two foreign countries. Each pays an entry fee and with added money, the winner at the first event took home $2,400.”

Bell Bucking Bulls are ranker than the rodeo bulls of earlier decades. “We had to build higher stronger chutes with more reinforcement for these modern bucking bulls,” Deidre said.

Two superstars among Bell Bucking Bulls are especially close to the owner’s heart. “I bought a white bull with black spots and named him Bradshaw Bourbon,” Bell said. “This bull is really outstanding, so I contacted Terry Bradshaw and got permission to name my bull after his whiskey.”

Bells Bad Boy is a ten-year-old solid black bucking bull that Bell raised. “He’s only been ridden three times in his lifetime with the winnings scores of 91 points, 88 points and 86 points,” Bell said. “This is Bad Boy’s last year to buck. He’ll be used as a breeding bull in the future.”

Main breeding bull for Bell’s bucking cowherd now is called U30. “He is a money producing sire,” Bell insisted.

“Children have really been excited about the mutton busting opening up each of the series,” Deidre noted. “They pay an entry fee and we also have added money and buckles for each jackpot.”

Likewise, barrel racers of the highest caliber have come great distances for the series. “We have junior and open divisions, with entry fees, and added money and buckles to the winners,” Deidre said.

Plans are being finalized for the return of the Odin Rodeo, September 10-11, with Medicine River Rodeo Company of Greensburg supplying the livestock. “It’ll be a Kansas Professional Rodeo Association (KPRA) sanctioned rodeo. Plus, we’ll also have a ranch rodeo and ranch horse competition on Saturday afternoon,” Deidre said.

Odin Rodeo Grounds has come back to life with crowds of more than a thousand spectators at the Sidewinders events.

“We are really excited about the progress we’ve made, but there is still a lot of work to do,” Deidre clarified. “It is pretty impressive how so many have been so generous helping in so many ways.

“We welcome everybody to come to the Odin Rodeo Grounds for true Western action at its best,” Deidre invited.

Details can be found on Facebook and at www.odinrodeogrounds.com.