“We come to entertain folks, let them forget about their troubles and have a fun time.”

Helen Russell was most emphatic as she excitedly talked, quite fast that is, about the Helen Russell & Company Show.

Growing up in a musical family in Shawnee County, Helen has been entertaining nearly all of her life. “My parents, Joe and Mickey Lawton and my brothers and I did shows throughout northeast Kansas back in the ’60s and ’70s,” she verified.

“We entertained at the Elmont Opry, north of Topeka, and my brother Alan is still part of those shows,” Helen continued.

A versatile musician, Helen specializes playing the piano accompanying herself singing about whatever songs one can imagine. “Oh, I play lots of different instruments, even the five-string banjo. But mostly piano nowadays in our shows,” Helen claimed.

When it was time to head off to college back in the late-’70s, Helen got her really big chance in life.

“Lee Mace at the Ozark Opry in Osage Beach, Missouri, offered me a job as a professional entertainer,” Helen said. “My folks didn’t have any reservations about me having a career in music. I went to work and am still doing what I enjoy most, entertaining.”

The Ozark Opry, with semblance of the Grand Ole Opry, was actually a forerunner to country music shows at Branson, Missouri. “Lee was ahead of his time, and a great country music entertainer himself who I learned so much from,” Helen appreciated.

For 19 seasons, Helen entertained at the Ozark Opry before starting her own road show. “I married my husband Elvis, now don’t get the wrong idea, but that’s his name. Even though he doesn’t sing, my Elvis is a musician and entertainer,” Helen clarified.

The couple has two adult children while continuing to make their home at Osage Beach, Missouri, when not on the road doing shows. “Our kids didn’t take to entertainment like Elvis and I have, but one granddaughter is quite musically talented,” Helen said.

Today, Helen and Elvis Russell have more than 250 Helen
Russell & Company shows booked annually. “It’s just the two of us, and we coordinate our shows to whatever fits the crowd,” Helen said. “Elvis is the master of ceremonies, plays the bass, and is a real comedian to be quite honest.”

Shows typically run about two hours of constant entertainment, but are readily styled down to an hour or an hour-and-a-half depending on the crowd.  There’s country, bluegrass, rockabilly, gospel and classic rock from the ’50s to the present. “We do the standards from all those genres along with several of our own compositions,” Helen said. “Every show is highlighted by a super tribute to our veterans.”

The comedy acts and impersonations are often what those attending the Helen Russell & Company shows remember and talk about most.

“It’s fast paced, no going back stage to change costumes, we just take off one wig, put on another and keep going,” Helen said. “I don’t want to let out any of our secrets. But the outlandish costumes are some of what helps make our shows more entertaining keeping spectators on the edge of their seats.”

Among impersonations the Russell team performs during their show are Willie, Waylon, Dolly, Tammy, Reba, Cher and more, but no mention of Kitty Russell, their 32nd cousin.

With chart listed recordings, Helen Russell & Company has been honored with the Valley Star Award for the “Best Small Band Variety Show” for the past three years.  “Those recognitions mean a lot to us, but receiving the Valley Star Award as ‘Entertainers of the Year’ in 2020 has to be frosting on the cake,” Helen admitted.

“A little bit country, a little bit rock and roll and a whole bunch of entertainment. That’s what Helen Russell & Company do,” the ‘Elvis’ Russell declared.

Perfect opportunity to be entertained by Helen Russell & Company is at three upcoming Farmer and Rancher Appreciation Dinners hosted by 580 WIBW.  They’ll be at Herington, July 14; Wamego, July 21; and Ottawa, July 28.

“The ‘Elvis’ and I will bring you live music that will entertain you with great vocals, scalding piano, hot licks on the banjo, jumpin’ bass guitar and drums,” Helen promised.  “Audience participation in the comedy will tickle your funny bone putting a smile on your face. You will be 100 percent entertained at this high energy show you don’t want to miss.  See ya on the front row.” 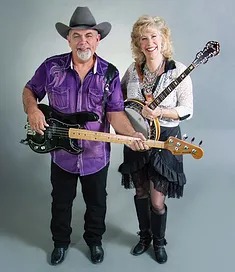 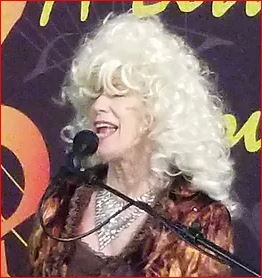