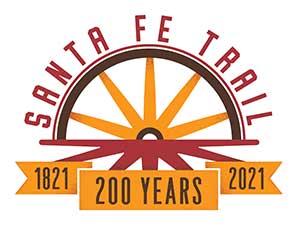 “The Santa Fe Trail Association is composed of people of all ages and walks of life,” Colle said. “They are bound together by an interest in the trail, and preserving its physical traces and landmarks that still exist.”

In 1821, the Santa Fe Trail became America’s first commercial route serving for nearly 60 years in western expansion. U.S. Congress recognized significance of the trail to American history by proclaiming it a National Historic Trail in 1987.

The Award of Merit was presented seven recipients for contributions to preservation, protection and promotion of the Santa Fe Trail.

Bents Fort Chapter Santa Fe Trail Association for efforts hosting the Symposium for the 200th Anniversary of the Historic Trail.

Symphony in the Flint Hills promoted the 200th anniversary with music and nature at its prairie gathering near Council Grove.

Christina Hayes and the Great Bend Convention and Visitors Bureau honored for work with the Quivira Chapter in anniversary coordination.

The Paul Bentrup Ambassador Award went to Rich Lawson, Warrensburg, Missouri, for preservation and access of the Arrow Rock Landing.

The David Clapsaddle Memorial Chapter Award went to Diane Miller, Inman, for grant work and planning for the 200th activities.

The Educator Award was presented Troy Mayhew, Kismet, for outstanding teaching about the trail in elementary, secondary or higher education.

The Louise Barry Writing Award was presented to David C. Beyreis for his book Blood in the Borderlands 1821-1920.

Special Recognition was given to singer Michael Martin Murphey as honorary chair of the Santa Fe Trail 200th Anniversary.

Hall of Fame inductees traveled on and/or made a significant contribution to or had impact on Santa Fe Trail history.

Rankin Scott Kelly, 1826-1913, Colorado Springs, Colorado, was a teamster, carpenter and stonemason.  He and others traveled the trail in 1860 with eight ox-drawn wagons and 48 cattle joining another 50-member wagon train.

John Van Deusen DuBois, 1833-1879, Greenport, New York, was detailed with 23 men to escort the mail party on the Santa Fe Trail. He traveled the Cimarron Branch through New Mexico, Oklahoma, and Kansas recording information on the stops.

Miguel Antonio Otero, 1829-1882, Las Vegas, New Mexico, was devoted to construction of the transcontinental railroad through New Mexico. He was a strong supporter of the Atchison, Topeka, and Santa Fe Railroad.

Charles Turnbull Hayden, 1825-1900, Tempe, Arizona, saw opportunities in the growing number of migrants moving west. In 1848, he left Independence, Missouri, with merchandise for Santa Fe, where he marketed goods and returned in the fall.

Leland Zerbe, 1930-2020, Council Grove, was a volunteer for the SFTA Heart of the Flint Hills Chapter for decades. He participated in trail rides throughout his membership riding on horseback across Kansas into New Mexico.

Davy Mitchell, 1923-2021, Lubbock, Texas, served on the Santa Fe Trail Association board of directors. Davy had an endless pursuit of knowledge about the historic Santa Fe Trail and never missed an opportunity to share his knowledge.

Margaret Long, 1873-1957, Denver, Colorado, was a doctor, who contracted tuberculosis and moved to Colorado to recover. Upon retirement Long devoted time to her interest in the West and western trails. She published several books with her best-known work, The Santa Fe Trail.

Richard Carillo, 1945-2014, grew up in La Junta, Colorado, surrounded by the history of the Santa Fe Trail and Bent’s Old Fort. He conducted historical archeological studies throughout the American West. Carillo became recognized as a scholar on history of southeastern Colorado and the Santa Fe Trail.