First and foremost, Rosie was a cowgirl, but the deceased Council Grove woman was much more.

During ceremonies Saturday night at Dodge City, Rosie Rezac Clymer was posthumously inducted into the Kansas Cowboy Hall of Fame.

Recognition was at the Boot Hill Museum with more than a dozen close friends and family in attendance.

Barbara Stanbrough of Council Grove presented the acceptance acknowledgement on behalf of the family.

Raised on a farm near Onaga, Rosie, widely recognized throughout the Midwest, was inducted in the rancher/cattlewoman category.

Chores caring for farm livestock was expected of and enjoyed by Rosie who always had a special fondness for horses.

From an early age, there wasn’t much Rosie didn’t help doing on the farm. She could milk cows, slop the hogs, help pull calves, and drive a tractor in the field.

Closest to Rosie’s heart was riding the family horses to gather milk cows and roundup grazing cattle. She rode in the county fair parade, other community activities, and just enjoyed riding horses around the farm.

By the time she was a teenager, Rosie on horseback was demanded helping neighbors with cattle roundups and day work. When a calf or stray yearling needed roped for return home or treatment, Rosie had the ability for the task 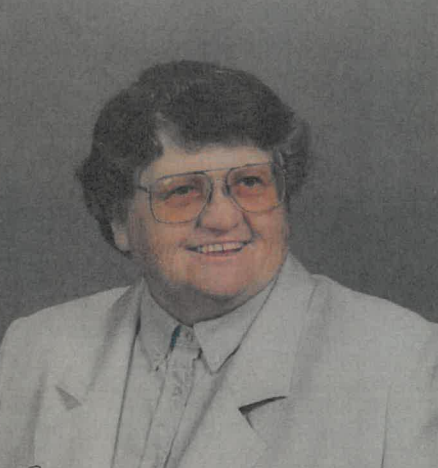 Family was always very important to Rosie who amply credited her dad, mom, and siblings, Rheve, Linda, Marjorie, Bob, and Don, for everything they did for her. Her 22 nieces and nephews were her especial pride and joy.

School days especially recess playing baseball and other playground games fit Rosie’s stout farm physique and image quite well. She was a big girl with an even bigger heart.

Always eager to talk in class perhaps a bit loud and with a giant grin, Rosie was everybody’s friend from classmates to teachers. 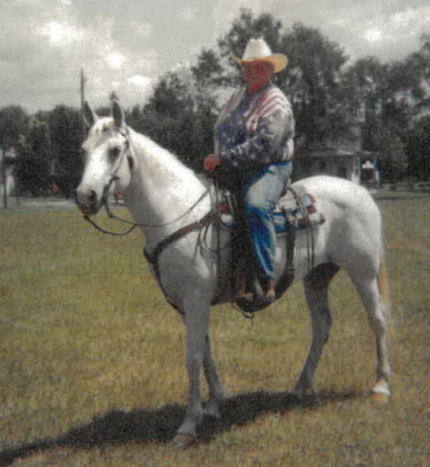 Faith was engrained into Rosie early in life regularly attending Sunday School. It was a heartfelt personal calling which Rosie followed throughout her entire lifetime.

Early membership in her Pottawatomie County 4-H club, Rosie found her cowgirl calling of participating in horse shows. Nothing gave her more joy than competing in every show class especially those running events, the faster the better.

There wasn’t a young horse that Rosie couldn’t handle never showing fright while gently masterfully patiently yet with firm hand training her own horses. Her talents became known throughout the neighborhood and beyond with horse owners even working cowboys from a wide area seeking Rosie to train their horses.

Goals in life were set early in admiration of her family’s farm life, her teachers in school, and being a cowgirl on horseback. She wanted to be a teacher developing youth physical fitness through athletics with continuing ties to farm work

Following high school graduation, Rosie worked her way through college training and shoeing horses. Farrier skills Rosie credited to learning from her dad were in demand over a wide area.

During college, Rosie became acquainted with Dr. Don Coldsmith an Emporia medical doctor and prolific author. She helped care for and train his Appaloosa horses while both were active in the Emporia Saddle Club.

Graduating with a college degree to become a physical education teacher, then known as Miss Rezac, yet often referred to by all as Rosie. She taught a one-room school in Wabaunsee County, Geary County Country School, Junction City Junior High, and USD 417 Council Grove Elementary School.

Beyond Bachelor’s, Rosie completed Masters and Specialist degrees in education. A Master Teacher Award nominee, she taught school more than 41 years before retiring to ranch and produce horses fulltime.

To have more horse shows in a closer locale with a set annual schedule, Rosie was instrumental in forming the Eastern Kansas Horseman’s Association (EKHA).

Competing in nearly all EKHA shows for many years, Rosie won awards in every class she entered at some time or another. Her home was filled with highpoint horse show awards. Rosie served as the EKHA president as well as other offices and committees of the organization throughout the years.

With mutual interests in riding and showing horses, Rosie became best friends of Faye Peck Heath. It was such that when there was a horse event, people just assumed Rosie and Faye would be there and they were.

Most importantly the two cowgirls assisted children with their horses during the shows. Whether getting into the gate, remounting after falling off, or loading in the trailer. Rosie and Faye were eager to help.

Students looked to Rosie for assurance and guidance whenever there was issue with sports, classmates, whatever the situation. Rosie was a leader among her fellow faculty members working to benefit of teachers, students, parents, and administration.

Young people with an interest in horses, but sometimes limited in opportunities were provided assistance by Rosie. On several occasions, she hired young women to work for her doing farm-ranch chores.

Several horse trainers got their start in the business thanks to Rosie. When she became older, and didn’t feel comfortable starting young horses to ride, she offered eager young cowboys the opportunity to train a handful or more of the horses she raised every year.

Earl Clymer was a successful farmer and rancher in the Kelso community north of Council Grove. Large in size, mighty in strength with humbled tender attitude, Earl fell in love with Rosie. They were married becoming an unbeatable team working the ranch whether bucking bales, pulling calves, or gathering a wild stray.

Earl and Rosie also participated in horse shows on weekends and were tough to beat in rodeo wild cow milking contests. Rosie did the roping, Earl did the mugging, and Rosie milked the cow, and ran across the finish line.

Big round hay balers were not invented until the late ’60s but became quite popular for ease of handling hay. Rosie bought one of the first big round balers in the area and custom baled literally thousands of big round bales every summer.

While many ranchers had Quarter Horses, Rosie had a number of mixed breed stock horses. Admiring the spirit and athletic ability of Arabian horses, Rosie started breeding her grade horses to her Arabian stallion.

Those half-blood and soon higher percentage Arabian horses were in demand by horse buyers. Services of Rosie’s stallions brought mares from many miles for horse owners to raise their own Arabian bred horses.

Arabian shows included percentage and purebred classes which Rosie showed her home raised Arabians to collect many championships. A member of national and state Arabian horse organization, Rosie became a leader in those groups as well.

Serving her faith in God, Rosie was active in leadership of both the Kelso United Methodist Church and the Council Grove Methodist Church. Serving as president of the Santa Fe Trail Parish Council, Rosie was a lay minister upon call for several area churches. Bible in hand Rosie portrayed realistically as a Circuit Rider in parades and gatherings over a wide area.

Never an idle moment, always a congenial smile, eager to help everyone, forever a horse lover, Rosie Rezac Clymer was the ultimate rancher/cattlewoman.