That was K-State Rodeo Team Coach Doug Muller Thursday morning as snow and blizzard conditions closed roads throughout the Midwest.

But, even though that true cowboy philosophy was the intent to follow, it was much more complicated.

“Contacts had to made with universities in the Central Plains Region of the National Intercollegiate Rodeo Association to determine whether it was logistically and feasibly possible for the 57th annual K-State Rodeo to go forward as long planned at Manhattan,” Muller admitted.

“There were more than 500 advance entries from Kansas and Oklahoma, and it was essential to get in touch with every team, before we could actually decide to go ahead,” Muller added.

“When we finally made our decision, many of the roads had been cleared off, so most teams would be able to compete.  Of course, we went with the majority who wanted to come, but there were about 40 entries that were forced to cancel. We agreed congenially to pay their penalties for missing the rodeo, in order that we could have it, instead of rescheduling,” Muller clarified.

“All in all, the rodeo at Weber Arena turned out to be very successful,” emphasized Beth McQuade, advisor of the K-State Rodeo Club, organizers of the collegiate rodeo. 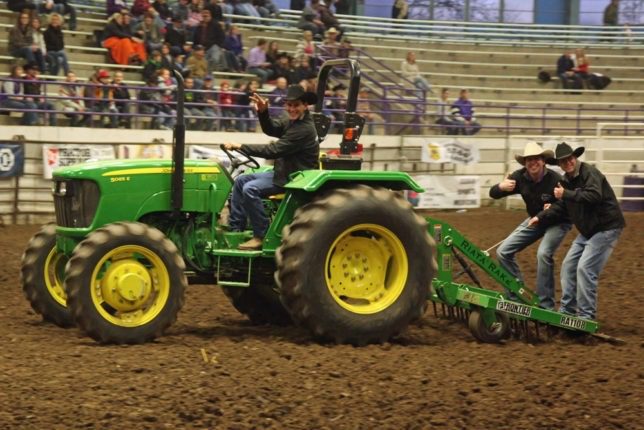 “We had great crowds at every performance. The Saturday night attendance was outstanding as were all of the cowboys and cowgirls, and the livestock,” McQuade added.

However, as easy as that might sound, there’s much more to it. “It took a lot of hard work and cooperation from all of the K-State Rodeo Club members. I really appreciate how everybody pitched in to make the show go on despite the snow making it difficult to get rigs parked and horses into Weber Arena for the performances,” Adam Pack, K-State Rodeo Club president credited.

“Because, there was so much snow on campus, we did allow the timed event contestants to come inside to warm their horses up during the rodeo intermission,” Pack related.

With a dozen contestants representing the K-State Rodeo Team, Muller said, “Cally Thomas, a senior in animal science, split second in the barrel racing with Latisha Simon from Pratt.”

A highlight of Saturday’s performance, according to McQuade, was coronation of Miss Rodeo K-State Lindy Singular from Linn by 2012 Miss Rodeo K-State Abbey Pomeroy. Cassie Sims was runner-up for the title, and Joanna Wright was named Miss Congeniality.

Other results, as announced by McQuade: