Gray Squirrel, owned by New Frontier Rodeo Company of Roxbury, shows the form that makes him one of the top bucking bulls in both the Professional Rodeo Cowboys Association and Professional Bull Riders events. His offspring will be featured in the draw for the Flint Hills Bull Blowout at Strong City September 8. (Photo by fotocowboy.) 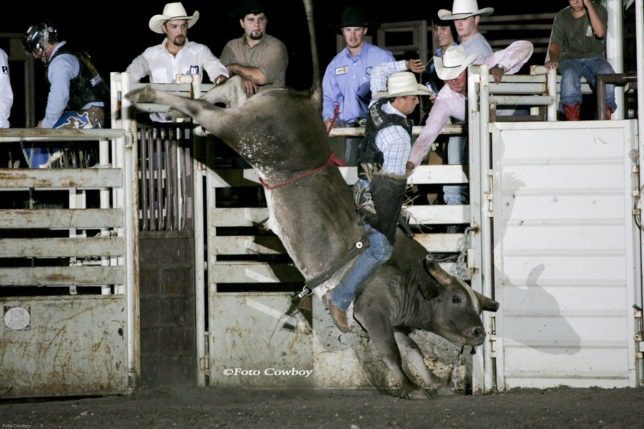 The most dangerous sport participated in by man is getting even more treacherous.

Unlike days of yesteryear, when rodeo bulls from the Southwest rangelands threw cowboys off largely due to sheer size, strength and male prowess, today’s bulls are bred with the sole purpose of bucking off cowboys.

However, the cowboys of today are a different lot as well, not like the range-tough rancher who typically participated in rodeo as a pastime. Modern-day bull riders are fit, trim, athletes on stringent diets and calisthenics programs who climb on mean buckers to make a living.

The best of the best rodeo bucking bulls and the top rodeo cowboys in the world are to be featured at the third annual Flint Hills Bull Blowout Saturday evening, Sept.8, at Strong City.

“Our bull riding the first two years has been such a success that we’re adding attractions this year to make it bigger and better,” exclaimed Kim Reyer, one of the event coordinators.

“We’re really excited about the quality of the bulls, and the top notch cowboys who will be competing, right here in the rodeo arena made famous by world champion cowboys Gerald and Ken Roberts, their sister Marge and dad E.C.,” Reyer emphasized.

Reyer’s Country Store, just across Highway 50 from the arena, and Flint Hills Genetics, a bucking bull breeding program, owned in part by Reyer, are again sponsoring the bucking bull extravaganza.

Competition will feature several of the bulls Reyer has produced with his partners, sons-in-law, Adam Spain and Kyle Gibb.

Majority of the bulls will be from Jimmy Crowther’s world-renowned New Frontier Rodeo Company at Roxbury, Kansas.

“Jimmy has the top string of bucking bulls in the country backed by more than 40 years of strict selection for bucking ability,” credited Reyer.

Crowther, a champion bull rider started breeding bucking bulls while he was still rodeoing in 1978.

Bulls headed to Strong City have had 98 outs at Professional Rodeo Cowboys Association sanctioned rodeos in Kansas and Oklahoma so far this year with seven completed rides. “That equates to a 92 percent buck off,” Reyer qualified.

The Flint Hills Bull Blowout again will support Ride Rank for a Cure, which is a non-profit organization to increase cancer awareness and provide support for those suffering with the disease.

“Ride Rank for a Cure donates 100 percent of profits from fundraising efforts to Susan G. Komen for the Cure, which is dedicated to the fight against breast cancer,” according to Ricky Ritter, Augusta bull rider who founded the Ride Rank For a Cure.

“In special recognition of the cancer-fighting effort, the bull riding will also be recognized as a ‘Tough Enough To Wear Pink’ competition, with many of the contestants sporting pink attire in support of the continuing importance, awareness and efforts to combat the dreadful disease,” Reyer said

An added attraction this year will be Wesley Engelkes, best known as “The Hippie,” who is a Professional Rodeo Cowboys Association contract entertainer, clown, bull fighter and barrel man.

Being a clown suits “The Hippie” just fine, he claimed, because it gives him the ability to use his sense of fun and high energy while working special magic that brings big smiles and merry laughter to the full realm of spectators attending bull ridings.

Children from a wide area for the past two years participated in the sheep riding, known as muttin’ bustin,’ and there has been even an expanded interest, according to Reyer. A $5 participation fee will be accessed for youth six and under with competition starting 6:30 a.m. Entries can be made by calling 620-273-6229.

The chicken scramble for youngsters 10 and under was also a feature the past two years that is being anticipated to add humor for everyone in the bleachers again during this year’s intermission.

“A mechanical bull will also be in operation before and after the Blowout to give spectators a partial feel of what it might be like to participate in the bull riding,” Reyer said.

Renowned cowboy singer and recording artist Rusty Rierson, who has performed throughout the country, will also entertain.

Top ten riders in the long-go will come back to the short-go round to determine the champion.

“We are excited to have a bounty bull this year for the winning rider to attempt to ride as a climax of the evening. If that cowboy can successfully ride that bull, he’ll receive an additional $1,000,” Reyer explained.

Information is available at www.flinthillsbullblowout.webs.com